While searching high and low all over Bermesiah and Silver Land for Dio, Ley sensed a distortion coming from the farthest reaches of the world. Feeling that the distortion had something to do with her childhood friend, Ley decided to go and investigate hoping she would find Dio there. However, along the way, Ley was surprised to find that the Ultima absorbed a strange new power.

The glove, which has been a powerful weapon passed down in the Crimson River family for generations, has the main ability to facilitate the summoning of magic and creatures without needing to draw spell glyphs which have already been inscribed into the gauntlet. The magic gem allows the creation of Dimensional Portals which the creatures can travel through.

When the Ultima absorbed the new energy, its power reached a new high which allowed Ley to grow stronger. While testing her new powers, the first thing Ley noticed is that she can summon her pet dog, Bastion Mary who appears as a small, nervous puppy. It is hard to imagine that she can take on a second form that is geared for combat, like a wolf of darkness, Mary has a real bloodthirsty instinct but is totally and completely loyal to her master Ley.

As the Harbinger, Ley can summon both Garouille and Bastion Mary who can be controlled by the player. The improved AI allows for more successful fights. The all-new jump and dash attacks serve to alleviate the frustrations of running dungeons as a Summoner.

Mortality
Add a photo to this gallery 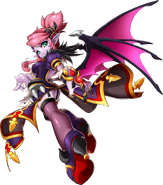 Retrieved from "https://grandchase.fandom.com/wiki/Harbinger?oldid=76199"
Community content is available under CC-BY-SA unless otherwise noted.