Harpe Noir was a knight of the Kanavan Royal Guard and a member of the Erudon family's intelligence unit, Existor. He was Ronan's greatest companion and held a very large amount of respect for the Ruby Knights as well as the Sieghart family whose warriors Ercnard Sieghart and Elscud Sieghart were said to be phenomenal fighters.

Harpe belonged to a family of servants of the noble family Erudon and from childhood, he was next to Ronan. A little older than the heir of Erudon, Harpe began serving as a page of Ronan, taking care of the boy and helping in their education.

Despite the small difference in age and social differences that separated them as master and servant, the truth was that for Ronan, Harpe was his greatest companion, almost a family member. For Harpe, who saw Ronan grew, the younger, despite being Harpe's boss, was also his best friend. Ronan also served as his example, even though the Erudon was younger. This was because early on, Ronan showed himself as a righteous person, good and reliable, a true leader in the eyes of Harpe. So the two have grown inseparable.

When Kaze'aze was influencing the Queen of Kanavan, she also affected Ronan, who was then the leader of the Royal Guard of the kingdom. This caused the young to lead Kanavan armies against Serdin mercilessly and became responsible for one of the most terrible wars that shook the two kingdoms of Bermesiah.

Even when Ronan became a ruthless leader, Harpe remained at his side. Having followed the Erudon throughout their lives, Harpe knew the true heart of Ronan and believed he would realize that he was following the wrong path. Harpe hated war but fought for Ronan and his cause. Above all, he fought to protect his friend.

Harpe was the only one capable of realizing that the battles were hurting Ronan. The truth was that Harpe believed in the purity of Ronan and was determined to protect him even from himself, all while the terrible war going on.

In the end, Harpe was right. The pure heart of Ronan was able to break the hold of Kaze'aze and the boy then tried to redeem their shares in the war. With the end of the War of Bermesiah, Harpe, who had remained faithfully beside Ronan until then, decided to join the organization Existor, an intelligence unit that has always served the family Erudon. Harpe joined Existor to investigate more about the Queen of Darkness which had caused so much harm to his master.

One of the discoveries Harpe found was related to Elscud, father of Elesis, wherein rumors claimed that he was still alive. Harpe would have brought this important information to Ronan when they would finally be reunited. But it turned out the worst possible time. Unfortunately, it seemed that when investigating more about the Essences of Power that Kaze'aze seemed to have looked for in the past, Harpe became involved in the problems of Grand Chase with Ashtaroth, and in the end, it cost him his life.

When confronting Dahlia, the dark elf mocked the annihilation of the Existor in the hands of Baldinar, particularly the death of Harpe, which enraged Ronan further. 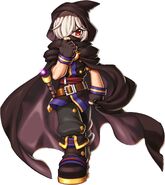