Deceased
Haru was a young patient from the Fermat Research Laboratory who acquired the demonic virus that was spreading in the ancient kingdom of Kounat.

There is nothing else known about Haru other than being one of the patients of Chief Researcher Fermat.

Haru was with Fermat when he spotted the Grand Chase who were on their way to the Kounat City Center. The doctor said that they were out in the night for his treatment then left abruptly.

The group came across Haru in the city who was stuck on the road late at night due to the soldiers blocking the way. Haru brought up that he would be all better soon thanks to his doctor who supposedly had found the cure. Learning that they were heading to the same laboratory, Haru followed the Grand Chase.

When asked about his disease, Haru revealed that he had the demonic virus which was plaguing the kingdom a few years ago. He added that if not for Baldinar, all of Kounat would have fallen to the disease. The boy was also looking forward to becoming famous as he would be the first person to be completely healed, oblivious to the origin of the strange lifeforms that had been appearing in the city.

When they reached Fermat, General Kanavan placed the doctor under arrest for being the main suspect in regards to the incident with the strange lifeforms much to Haru's shock. Shortly after, Haru would undergo an agonizing transformation caused by Fermat and became a monster that left the Grand Chase with no other choice but to end his life. 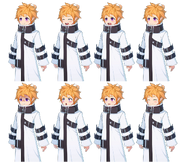 The expression system of Haru.