You want me to introduce Hekar? Since I am not very good at speaking, I'm not sure how helpful I'll be. Even if it's short, I hope you'll understand.

By the time that Hekar finally matured he had already been working on a pirate ship for several years. I don't remember if it was Captain Scissor or Captain Claw, but he told me that while he was there he had risen to become their first mate.

However, he quit being a pirate because of the guilt he felt for all the bad things he had done along with the doubts he had on whether this was the life he wanted to live. After wandering the seas, he came to the temple and became a bodyguard.

No matter how many enemies would appear, Hekar would bravely protect me. When I would see him standing in front of me... Just looking at his back felt so reassuring...

Unexpectedly, he is very sensitive and there are parts of him that I find very sweet. Last time he saw a baby octopus crying because it had lost its parents. Hekar became so anxious that he took action and found the baby's parents. I could see that he was trying to hold back tears when he saw how happy the baby octopus was when it was reunited with its parents. It was really very sweet...

Hekar can be fought as a mini-boss in Act 4.3: Everlasting Love and uses his designated skills as a unit. Later on, he will fight alongside Mamin as proper bosses. 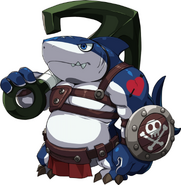 Guardian of Love icon.
Add a photo to this gallery

Retrieved from "https://grandchase.fandom.com/wiki/Hekar?oldid=72734"
Community content is available under CC-BY-SA unless otherwise noted.