『Nowadays, there are a lot of people who think that working at a railway station is a way to turn your life around. They probably think that way because once you become a permanent employee, you can enter the headquarter that is on the outskirts of the city. It means there are a lot of desperate people. It's very unfortunate. Instead of wanting to guide dead people to the Underworld, they just think of it as a way to turn their life around.

Therefore, a lot of people quit their dream of becoming a railroad Steward because of the high competition rate. I can tell you to not get scared from the meaningless number. All Haros will not become your competitors. For the first entrance exam, you don't compete against others but only yourself. The success is not dependent on your competitors but your grade. It's important to pass the passing point of five basic subjects and two chosen subjects.

My studying life was overall calm. I found joy in little things in life so I found happiness while I was studying. Instead of closed places like the library or a reading room, I studied better in places with conversations and music like a café.

I took classes from Underworld Edu and reviewed at a café. Underworld Edu allowed me to only take classes on subjects I was doing poorly in so I could use my free time on something else. There is a discount if you enroll in more than three classes so take advantage of that. There are additional benefits if you write a recommender so you can use my name. After class, I always visited Café Buck near the five-way intersection. Darjeeling tea from this café helped me focus better. Also, they play white noise so it's good for students to focus. Other places give you a free drink if you get fifteen stamps but this place only requires twelve. Studying has to be a part of your life. Learning has to become a part of your life. You must be able to open your book whenever you want to. Therefore, I recommend staying at Sangah Study Room across the street from Neoul Park. The place is clean and quiet so it's very helpful if you want to study more or want to sleep. You can also use the park right across the street if you feel like you need some exercise. Even if you signed a long-term stay, they will give you a refund if you pass the test. You can use my name as a recommendation if you need a room discount. Don't study blindly. You have to take care of yourself. I go to a dermatologist to get a face massage every day to get rid of my stress. The reason I became a promotion model as soon as I started working is that I took care of myself. If you buy sixteen procedures and use my name for the recommendation, you can get twenty procedures so make sure to take advantage of it. I am Underworld Railway Station's 1749th new employee, Hyde.』

Hyde puts down her pen and started to go over her passing memoir. Underworld Edu, Café Buck, Sangah Study Room, Dermatologist... she referenced all the places she was supposed to promote. Hyde smirked after she re-read her memoir.

"Do you think you'll be able to pass by copying me? You can't pass because you think of becoming an Underworld Train Stewardess as a way to turn your life around. Do you think I'm here to become a mere Stewardess? If you want to succeed, you have to enter the city!"

Hyde can be fought as a boss in Raid 5.1: Ticket to Underworld.

Hyde utilizes the same attacks she has as a playable character. 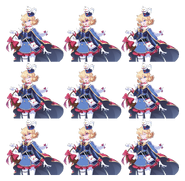 The expression system of Hyde.

The Face of Underworld Train icon.
Add a photo to this gallery 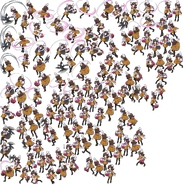 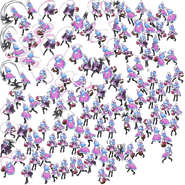 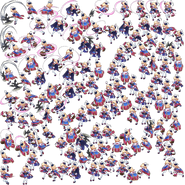 Retrieved from "https://grandchase.fandom.com/wiki/Hyde?oldid=76950"
Community content is available under CC-BY-SA unless otherwise noted.