Alive
Jeeves is a demon butler of the Crimson River family who is fiercely loyal to Ley much like how Alfred is very obedient to Dio.

There is nothing else known about Jeeves other than that he was also called the "Blood Red Slayer". Like his other fellow servants, Jeeves tries to do everything in his power to please Ley.

Jeeves appeared in Kerrie Beach along with Ley to search for the head of the Burning Canyon family, Dio, under orders of her father, Peter von Crimson River.

The duo appeared again in King Guang's Fen and encountered the Grand Chase, asking them if they had seen Dio but were disappointed when they found out they had not and left.

On the seventh floor, Jeeves was trying to stop Ley from smacking him after she got very annoyed with Zero's silent treatment towards her, telling the butler to just do his job and escort the lady if he did not have anything nice to say.

Later on the twentieth floor, Ley finally found Dio. However, as she was thanking her butler, Jeeves was nowhere to be found anymore.

At some point in the tower, before they came across Dio, Jeeves decided to free his powers that had been sealed inside the Ultima. But in doing so, he released all the powers of darkness that were sealed in the glove, which led to the Ultima trying to take total control over Ley.

Ley mentioned that she could not get into contact with Jeeves or Dio after she landed in Mouspia with Jin.

When Ley sought her father and Jeeves, butler Daniel claimed that they just left due to something very urgent.

As Ley interrogated Daniel about the whereabouts of her father and Jeeves, he claimed that it was too late as they had already been dealt with by Pino and was sure they were locked up in the Purgatory.

Although Jeeves knew that Dio was coming to rescue them, Peter stubbornly refuted his statement saying that they made it out just by themselves. The butler hesitantly tried to explain further but the bloody ruler ignored him, proceeding to berate Veigas.

Shortly after, Jeeves learned about the alliance formed between the two demon chiefs and thought it was an amazing plan for the current situation. 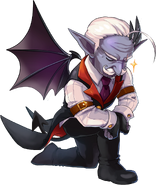 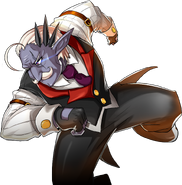 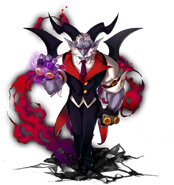 Jeeves when summoned by Dark Matriarch. 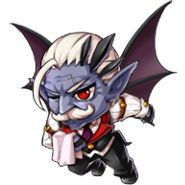 Jeeves in Grand Chase Dimensional Chaser.
Add a photo to this gallery

Retrieved from "https://grandchase.fandom.com/wiki/Jeeves?oldid=83282"
Community content is available under CC-BY-SA unless otherwise noted.