Justice is the third job of Lime. There is nothing else known about this job except it was going to be planned by KOG. As of the closing of all servers, this job was never released and was cut from the game.

The job name was identified upon being added as an Awakening class in Grand Chase M which was then verified by the administrators of the Grand Chase Players Facebook page.

Liberation
Add a photo to this gallery 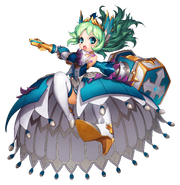 Justice in Grand Chase M.
Add a photo to this gallery

Retrieved from "https://grandchase.fandom.com/wiki/Justice?oldid=76037"
Community content is available under CC-BY-SA unless otherwise noted.