Kali is the master thief that resides in a place called Narland Valley.

Kali is known as the Queen of Thieves that calls herself the "goddess of destruction" as she is truly a beauty. Despite her vanity, Kali is among the great warriors who fought together against the evils of Kaze'aze for the peace of the Bermesiah continent.

Though not mentioned in the story, Kali appeared briefly in the Korean server of Grand Chase as an NPC in the Serdin Park. She made her debut in Grand Chase: The Cellular Game. 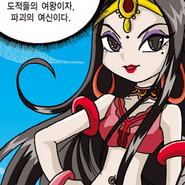 Kali in the manhwa.