"You're a crybaby from a noble family... hahaha!"

Other children started to laugh as Karp started laughing. It was a sight of a leader and his friends in a neighborhood who liked to bully other kids.

Demon Kindergarten was always busy. There were a lot of ambitious children who wanted to take over the kindergarten and order the other kids around. Karp Dryfield was one of the ambitious children. No, since he bullied Dio Burning Canyon from the noblest family, Karp became the only leader of the group. Thanks to Dio, Karp and his friends became powerful.

A pink-haired girl appeared before them. Demon Kindergarten's absolute being, the ultimate hunter who makes the teachers shiver in fear, Ley Crimson River. As soon as Ley appeared, Karp's friends started to back away in fear.

"Are you the one who hit Dio yesterday?"

Since Karp knew her evil reputation, he cringed in fear. But he couldn't back off since he was the leader of the kindergarten. He needed to beat her to become a true leader. Karp was watching Ley carefully as he was thinking about this.

There was no reason for him to be scared of her. She was ahead shorter and way skinnier than him. He was twice as big. Although she looked bigger from her clothes with lots of feathers, it wasn't like her real body got bigger.

Anyway, what's up with that weird fashion?

At that moment, Ley who was laughing jumped off from the ground and laid down her body while kicking both legs. Karp immediately knew that it was Wrestler Birdman's Join Dropkick. That's right! Ley was wearing Wrestler Birdman's costume! However, Karp realized too late.

With a short scream, Karp was hit by Ley's Join Dropkick.

"I couldn't use my new skill on Dio because of you! So you have to deal with me!"

Skill? What skill? For a wrestling skill, this Join Dropkick was a 10 out of 10. The perfect posture that allowed you to know that it's a Birdman's skill, the pain from the perfect hit, every element was making Ley the Wrestler Birdman.

But Karp couldn't say that. Ley quickly picked Karp up by the arm, laid him down on the ground and locked his arm with her body. Karp knew the name of the skill. And also knew the pain. It was called an Armlock.

Karp screamed and surrendered while hitting the floor with his hands, but unfortunately, there was no judge. Ley talked bluntly.

"Hmph! I can't tell if the skill is correct because you're so fat! Do I have to twist more?"

Karp woke up from his sleep while screaming. He was sweating from all parts of his body. Although it happened a long time ago during his childhood, it was as if it happened yesterday. Karp exhaled a rough breath and dropped his head.

"Still... still having dreams about this..."

"Get ahold of yourself Karp Dryfield. You are a new person! This body is Red of Arrogance. Leader of Guilty Seven! Don't be restrained by the past!"

Karp hypnotized himself and pounded on his chest. He stopped while flinching. It was the place he got hit with Join Dropkick. Can he withstand the blow if he fights her now?

"Ley von Crimson River... I'll not lose this time. This time! This time!!"

Karp started doing pushups after he woke up from his sleep and aroused his fighting spirit.

Karp utilizes the same attacks he has as a playable character. However, he and his associates in the Guilty Seven lose power as time passes by and thus the damage they receive increases by 7% per stack.

The expression system of Karp. 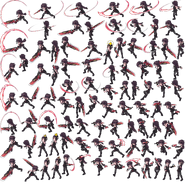 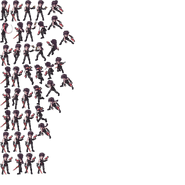 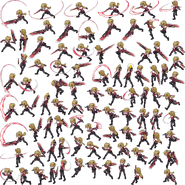 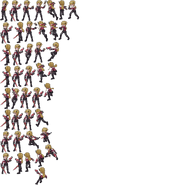 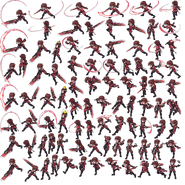 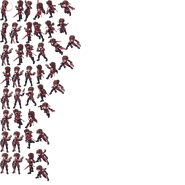 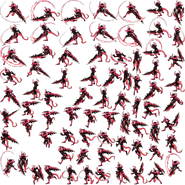 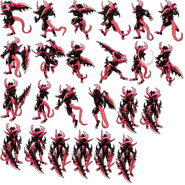 Retrieved from "https://grandchase.fandom.com/wiki/Karp?oldid=82217"
Community content is available under CC-BY-SA unless otherwise noted.