Kaze'aze is the initial primary antagonist behind the scenes causing the five-year war between the Serdin and Kanavan kingdoms.

Kaze'aze was formerly a human named Karina Erudon. The general's descent to darkness occurred when Ashtaroth attacked her, the two princesses and several other royal families at the Gorge of Oath. Karina who protected the princesses was cursed with a demonization spell and as a consequence, she was pointed as a participant in the massacre, banishing the Royal Guard from Kanavan for eternity. Since then, Karina grew hatred toward humans. Ashtaroth later appeared before her and taught the lady how to use demonic powers and other evil magic, leading to her rebirth as Kaze'aze.

On the year 1454, Kaze'aze infiltrated the Kanavan palace by killing Queen Kanavan's most trusted adviser and disguising herself as him. She possessed the Queen and also put Ronan under her spell after being spotted. Eventually, war breaks out between the kingdoms of Kanavan and Serdin with Ronan Erudon leading the Kanavan forces.

When sent in the front lines, Queen Serdin took advantage of the opportunity and conducted an awakening spell on Anyumena. After realizing what happened, Kaze'aze placed an even more powerful enchantment upon Queen Kanavan to seal her psyche then ran away.

Later in Ellia, Kaze'aze discovered Lass Isolet, a scion of the demon race, and sets her eye on him as the sorceress' possible vessel.

Many creatures creating havoc on the whole continent of Bermesiah such as the Harpy Queen and the Troll were enchanted by Kaze'aze while the Orc Lord, the Red Gorgos and Gaikoz himself fought under her regime.

Kaze'aze was mentioned many times by the Grand Chase during their time in Silver Land believing her to be the culprit beyond the corruption. However, they learned that an even greater agent is at work. The inhabitants claimed that the threat was coming from the "land of the gods", a place where Kaze'aze wasn't at.

An illusion of Kaze'aze using the form of Lass leveled off the ship in Partusay's Sea that was headed towards Ellia with the Grand Chase on board.

Kaze'aze Lass was officially encountered at Kamiki's Castle. Ryan and Ronan were able to discern that the boy was possessed by Kaze'aze herself. He left immediately and later returned to resurrect a defeated Elena by transforming her into a demon.

The Chase finally reached her stronghold and fought Lass before confronting the evil sorceress herself. When defeated, Kaze'aze manifested herself into a colossal beast and clashed with the Grand Chase.

Afterward, Elesis demanded her father Elscud. Kaze'aze revealed that she sent him and the rest of the Kanavan Trackers into a dimensional rift and are likely screaming in the abyss. Before she perished, Kaze'aze warned the Grand Chase of her return.

Veigas later arrived in the tower and encountered Kaze'aze then he asked about her alliance with someone in which she refused to reply. He left shortly after the Chase appeared, not wanting to get involved.

During her battle with the Grand Chase, Kaze'aze attempted to possess Ronan again stirring up his memories. Then she revealed her past life to him as a member of the Erudon family. As he struggled to fight her enchantment, Kaze'aze went for the kill when Ronan resisted mind control and used his body to shield his comrades. An amused Kaze'aze simply left.

In the aftermath, Kaze'aze spoke to an unknown person who demanded to bring them to his place.

After the events in the Tower of Disappearance, it was revealed that Kaze'aze was an ally of Elscud himself much to his daughter's shocked. Elesis proceeded to fight them on her own.

After Belile's defeat, Decanee showed herself to the Grand Chase and briefly told them a familiar story of a girl who was banished in Kanavan. They were horrified when Decanee transformed into Kaze'aze, however, she claimed that they are not the same people despite having her memories.

Upon the first encounter, Kaze'aze resides in Lass's body and uses him to attack the Grand Chase. Kaze'aze Lass possesses the Thief's basic combo, Double Jump, Kunai Toss, Dash Attack, Impact Slash, and Final Strike Chaser. The match can be seen in a way as a PvP match, however, Final Strike Chaser cannot kill as it passes through the floors without heavy explosions. He does not have Fatal Tempest Fury nor Skill Tree and neither players nor Kaze'aze Lass can grab one another.

Kaze'aze Lass also has a gimmick that whenever he takes too much damage, he will slide out of harm's way and is invulnerable and intangible throughout the slide.

After defeating Kaze'aze Lass, Kaze'aze discards the body and assumes her beast form. Her attacks involve a low swipe, a claw slash that leaves off a dark orb that does constant damage over time and haste, running across the room and trampling, a roar which summons a dark vortex on top of her enemies that suck in them to deal damage much alike Dio's grab, a full spin that shakes off her opponents and a DANGER attack involving her pounding the ground three times.

Kaze'aze in the Tower of Disappearance takes the form of a human-like character. Kaze'aze touches her surrounding eye-shards in a sequence, an indicator of her attacks. She also frequently teleport around the four corners in the room as well as the room's center though she does not walk around. Her attacks involve:

During the battle, there is a gauge in the top center of the screen, which fills if players stay too far away from Kaze'aze. If it fills, Kaze'aze summons a dark orb that expands over the entire screen, instantly knocking everyone into FATAL and completely bypasses any form of invulnerability. The gauge empties once this is complete.

In the final room of Tower of Disappearance, Kaze'aze sends her eye-shards to the center of the screen and summons a gigantic demonic figure. In this fight, Kaze'aze retains all her abilities but executes them faster and does not touch her eye-shards. The demon itself is part of the background and cannot be attacked. Also, the gauge will fill regardless of the position of the player and at a faster rate than before.

The demon has only one attack. It will lock on the position and impale the player with two of his thorns that hangs on the top of the screen. The actual physical hit doesn't do damage but upon hitting the ground, a dark zone will appear beneath it that inflicts small damage over time and slows the player inside it.

During this battle, Kaze'aze has 2,000 HP making her nearly impossible to defeat. Fortunately, it is not necessary to kill her to win the battle. The players must survive her and the demon's onslaught for about 4 minutes and dialogues will appear which makes the two stop attacking and disappear afterward, leading to the completion of the dungeon which will fail anyway due to the story. If the players somehow manage to defeat Kaze'aze, the ending dialogue will appear instantly without needing to wait 4 minutes.

Promotional artwork of Kaze'aze in the Nightmare Circus update. 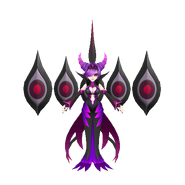 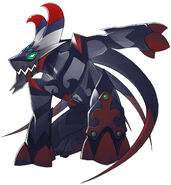 The expression system of Kaze'aze.

Kaze'aze during the Kingdom Wars.

Kaze'aze in Tower of Disappearance.