Act 1.6: Herb Fairy, We Meet Again
Kiwi is one of the merchants sent by the Dimensional Trade Exchange to assist the Grand Chase in pursuit of Decanee.

There is nothing else known about Kiwi other than being a Dimensional Trade Merchants employee alongside his partner Apple.

Taken captive by Carnero, Kiwi was blamed by Apple for not bringing Nascaliber as he was told. He replied that she was the one that said it was cumbersome and left the railgun.

Kiwi was freed along with Apple after Kyle and Cindy came over to fight the Ramblins, thanking the humans for saving them. As Apple caught herself midway after she was about to reveal who they were, Kiwi told the warriors to pay no mind about it then promised that a time would come for them to return the favor. They teleported away from the scene afterward.

Yet again, Kyle and Cindy saw Kiwi and Apple surrounded by enemies and came to rescue. The magician asked him about why they keep coming to dangerous places to which Kiwi admitted that they were trying to search for someone named "Guile". As Apple once again stopped herself before she was able to introduce themselves due to being provoked when called weak, Kiwi said to ignore it and swore that there would come a time where the warriors would be requiring their help. They left afterward.

During a standoff between Decanee and the Grand Chase, Kiwi and Apple appeared along with the Bounty Hunter, Rufus, who was entrusted with the situation by the two. As everyone else was teleported back to safety, Kiwi was finally able to introduce themselves and attested to what his partner said about the Dimensional Trade.

When asked about their current whereabouts, Kiwi informed the warriors that it was a safe house in Beroiah that they had prepared. Then he proceeded to tell them that the Grand Chase lost most of their powers due to the impact of dimensional travel and until they recover, it would be difficult to defeat Decanee, therefore declaring that they work together.

Kiwi presented a swordsman from Teroka who would explain the situation to the group. The merchant theorized that the enemies were doing a large scale ritual to try using the Avatars of God and their powers.

As they went back to Teroka, Kiwi told Kyle that while his ambition to defeat Decanee was great, they must deal with the enemies in front of them first.

Kiwi received a report that a large summoning of monsters was detected and would surge their vicinity in about ten seconds. He informed the group on how the headquarters could help through radio interference.

Later on, Kiwi just heard from HQ that the summons could not be blocked anymore when he saw Bergamot, becoming further distressed that a big-time killer like him was working under Decanee.

Even though he said it was to be expected, Kiwi was still baffled that the enemy would summon such an enormous evil like the demon dog of hell, Cerbero. Nevertheless, he instructed the group on how to defeat the demonic beast.

Kiwi and Apple took custody of Sage after the Grand Chase defeated the religious criminal. Eventually, the merchant was able to confirm that Decanee did not have the powers yet after Sage spilled the beans.

Kiwi resorted to a method he did not want to use and told Apple to not worry about not receiving approval as they were in a crisis. He would use the secret weapon that would make the demons disappear in one shot by gathering energy from five powerful beings. The merchant encouraged Kyle and Cindy when tasked to protect the Grand Chase while they focus.

To his dismay, Kiwi identified Sofia among the demons and realized that she had not been streaming as much because of her new job which turned out to be working as Decanee's subordinate.

In the end, the merchants rejoiced as they succeeded to wipe out all the demons.

Kiwi demanded Decanee to give up as most of her subordinates have already disappeared. However, only after the Grand Chase took down Balzac and Poseidon that he realized the demon used them to kill the remaining Avatars of God for her.

As the group feared that Decanee has already gone to Elyos, Kiwi was told by the General Affairs Bureau that the demon went to a completely different dimension. The merchants also received orders from their superiors to sought help from the Grand Chase whom they thought were the only ones capable of stopping Decanee and her plans.

Kiwi warned the group that things would become more difficult from that point on. After Apple specified the details about a special item, he added that they could disguise themselves as Mouspians then make contact with Decanee through this item. Despite their lack of enthusiasm, Kiwi insisted that they take on the hoodlums nearby as they could be troublesome along the way.

Act 8.2: The Back Alley People

Carrying on Apple's claim, Kiwi stated that Decanee was not showing up on their detection tools.

Arme expressed her concern that the merchants may be tricking them by using Decanee as an excuse. Ronan opted for the group to complain if they still have not found Decanee after dealing with hoodlums with Lass suggesting that it would not just end with a simple complaint.

Three days after they disappeared, Kiwi and Apple were able to get in contact with the Grand Chase again and asked what happened to them. The group claimed that they were only gone for a bit which confused the two merchants and so Kiwi demanded them to explain in full detail.

Kiwi mentioned that between scholars, there was an opinion that just as how a Dimensional Chasm allows someone to cross over dimensions, there exists a Time Gap that allows them to cross over time, realizing that the artifact was the key to go to that place. He added that crossing through time is comparable to the power of the Creator therefore it would make sense for Decanee to seek such power. However, he learned from Jin that the demon was already in possession of the artifact and yet she was still looking for one therefore Kiwi figured out that there are two of these items, remarking that the Dimensional Trade Exchange would lose their dignity for it. With the disciples of the Creator's Morning being their only leads, Kiwi said to meet them first then decide the next course of action later.

After fleeing from the security, Kiwi admitted that they thought it would help the Grand Chase by disseminating the composite sketches of Big Al's bodyguards to the security after the group disappeared. He stated that it would take some time to recall the most wanted report therefore they would have to stay hidden and avoid the security as much as they could.

After presenting the fake artifact to the group, Kiwi added that they also attached a GPS inside of it. Then he told them to give the item when they meet the disciples.

After rescuing the rest of the survivors, Kiwi responded to the already troubled Ronan that their enemies also left behind the fake artifact the group used to trace them.

Despite the unfortunate news about Pino, Kiwi motivated the Grand Chase to capture the culprit of evil for the same tragedy to never occur again.

As they witness a familiar scene, Kiwi concluded that there was only ever a single artifact and the one the group saw with Decanee was the same artifact albeit originating from a different time.

The Grand Chase came across the prison warden Berri whom Kiwi immediately recognized, not expecting he would be in Kounat, and told them that he left the Exchange about 1,500 years ago. The merchant then questioned Berri for switching jobs and informed him of how much of the merchant's annual income has increased since then, feeling sorry for him not staying a little longer.

After being brought back to Kricktria, Kiwi verified the time frame where they were only a day before their original timeline.

Already away from the group, Kiwi told the Grand Chase that he and Apple could not enter the Demon World due to their status though they have all the group's documents ready for entry. However, he heard Elesis who just noticed a very large quantity of soldiers in the vicinity which he found rather strange and told them to hold on for a moment.

Later on, Kiwi reported that a group called the New Hardliners took over the Demon Realm Council a few days ago and that the Grand Chase must be on their most wanted list.

Sofia's Livestream was about to start when Kiwi was contacted by Cindy, much to his displeasure. He was inquired of any new detail regarding New Hardliners with the merchant responding that they announced Heitaros to be their Supreme Commander. Kiwi also mentioned that both Terre and the Burning Canyon were already taken over.

Kiwi was contacted after a long time and learned that the Grand Chase was headed to the Underworld, wondering if they were also going to visit God World or the Spirit World next time. The group was told by Apple that the upper classes of the Underworld don't do business with Dimensional Trade Exchange but luckily Kiwi was able to find a Bounty Hunter that could guide them to the last stop of the Abyss for free and they could request an Underworld Train worker to deliver the news. Afterward, he would send them the coordinates of the meeting place.

Kiwi was proud that he was able to bring back the Grand Chase in Aernas despite Amy asking him how many times they have had a crash landing during a fair amount of time, shifting the blame to Decanee who twisted the dimensions. Then after educating Rin that he is not a cat, Arme ordered the merchant to let Apple do the guiding since others would take the wrong way if he contacts them late again. 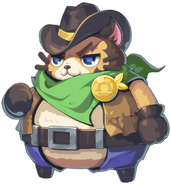 The expression system of Kiwi.