The Klara Libri (also known as Claire Bible or the Bible of Revelations) is one of the oldest artifacts in the history of Aernas. It is a sacred tome containing all the secrets of the world including information about the demonic tribes, deities, and even the Creator God.

It is said that only deities can read the Klara Libri. Although they have the bloodline of the gods, Celestials are not capable of interpreting it to the same extent of that of a deity. It is unknown what came about the Klara Libri after Duel took custody of the book.

Kassias Grandiel holds a replica of the Klara Libri though it is said to be significantly less powerful than the original. However, it was still powerful enough to defeat Ashtaroth in his god-like form and seal him away.

The Klara Libri was a sacred tome that was made by the Celestial research group who had been studying the Holy Powers of the gods in the divine land of ancient Kounat. While researching eternality of the Holy Power, the research group came upon klaros which could be successfully created into Klaronium. It did not have all the characteristics of the gods such as autogenic power but the Klaronium had the functionality to carry out whatever settings were made on it forever. Despite numerous researches, only a few amounts of it could be obtained so the research group decided to use the Klaronium to create a history book that would write about their divine country and all secrets about the world by itself. This is the permanent self-writing Klara Libri.[1]

Hundreds of years after the First Demon War, the tome was discovered by the ambitious Baldinar which made him crazy. He hatched a plan to become the new Creator to obtain absolute control over the powers of evil and good. He went on to study the demons that had been trapped in Aernas and collected their Demonic Essences. Then he decided to use the power of the gods which laid inside the Aernas Hammer. Following the instructions of the Klara Libri, he used this power to create the Soul Stone and planned to unite it with the Demonic Essence and Aernas Hammer to obtain the ultimate weapon and become the new Creator. This ambition led to the tragedy of Kounat.

After the onslaught on the Highlanders by Ashtaroth, the sole survivor Ercnard Sieghart began to travel the world to track him down. It was revealed that he was looking for the Klara Libri to find out the identity of the perpetrator and his purpose.[1]

While looking for the Klara Libri, Sieghart felt a connection to the divine land of ancient Kounat from Mari and kept an eye on her to find evidence of the tome.[1]

Grandiel utilized the power of the Klara Libri's clone to forcibly warp the entire Grand Chase into his labyrinth. Then he engaged in combat with them as training to defeat Ashtaroth.

Grandiel again employed the Klara Libri's clone to warp the Grand Chase into the Underworld's Monster Train 301 as an attempt to retrieve the soul of their comrade Harpe Noir. Ashtaroth commented on Grandiel holding the clone.

Grandiel used the Klara Libri's clone to defeat Graham's Relics and Ashtaroth after he transformed into a god. Afterward, he used it to seal Ashtaroth and the Aernas Hammer as well as himself in the Wizard's Labyrinth. Duel then erased Mari's memories of the Klara Libri to ease her suffering and then took the sacred tome.

Grandiel with a copy of the Klara Libri. 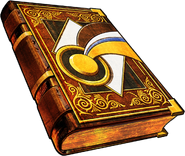 Retrieved from "https://grandchase.fandom.com/wiki/Klara_Libri?oldid=80437"
Community content is available under CC-BY-SA unless otherwise noted.