The Knights of Serdin are an army of soldiers located in Serdin. To those who want to join the ranks, they need to defeat monsters scattered throughout the continent of Bermesiah.

There is nothing else known about the group but is presumed that they were organized since the founding of the Serdin Kingdom in Bermesiah. In the present time, the Knights of Serdin are gathering warriors that are skilled enough in using spears.

Edel Frost is a member of the Knights of Serdin. When her twin brother Adel suffered from a debilitating disease and could not leave his home, it fell to her to enlist in the Knights of Serdin to restore the Frost family's honor. Edel quickly rose in the ranks of the army thus reaching the rank of Captain.

Lothos Isolet is the Knight Master who fought remarkably in the Kingdom War era. A paragon of knighthood, Isolet strives to reinforce the power of Serdin Kingdom as a commandant and is doing her best to train new soldiers.

Bestair is the Guild Manager who once aimed to join the Ruby Knights. Even though he did not manage to get into the group, Bestair got enlisted later on as a Knight of Serdin.

Jason is the commander of the Serdin Knights' security team. He became one of the people who fell victim to soul erosion created by Vice. 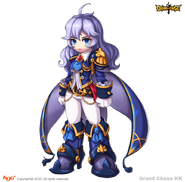 Jason in Grand Chase Dimensional Chaser.
Add a photo to this gallery

Retrieved from "https://grandchase.fandom.com/wiki/Knights_of_Serdin?oldid=82785"
Community content is available under CC-BY-SA unless otherwise noted.