Krakos is a very large crustacean monster that was fought as a boss in Lake Aurora.

In Grand Chase Dimensional Chaser, Krakos has gone by the name "Krakaiser" after he succeeded in adapting to a new environment that is Partusay's Sea.

There is nothing else known about Krakos other than being a subordinate to the Ascendant God. At some point after his first encounter with the Grand Chase, the freshwater creature became an ally to Taloc and, by his grace, supposedly evolved into a deep-sea monster.

Eyeing the large crab, Arme expressed her gratitude to the Supreme Goddess of Bermesiah for stumbling into Krakos as they, the group, were about to feast on him. After his defeat, Krakos was surprised by how his massive shell was broken then he muttered some insubstantial details about his master. Jin surmised that he had nothing to do with the waters of Lake Aurora and believed something happened to King Guang.

Krakos tried to impede the Grand Chase from continuing further but he became offended after Arme recognized the creature and brought up his origins, insisting that he was then the deep-sea monster Krakaiser. To his disbelief, he lost despite the hardships he went through to become a deep-sea monster and regretted not being able to repay Taloc.

The most common attack of Krakos is swinging his claws to deal with minor damage when they hit. He also slams his claws on the ground causing stalactites to fall from the ceiling which can only be avoided by standing under him. Shortly after the stalactites stop falling, he slams his body against the ground hurting players if they are too close.

Krakos can also charge forward launching players into the air when he hits them followed by breathing poisonous bubbles onto the platform above him, preventing players from hiding outside his attack range. 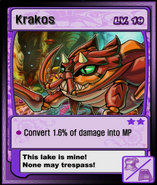 Krakos' Monster Card.
Add a photo to this gallery

Retrieved from "https://grandchase.fandom.com/wiki/Krakos?oldid=82006"
Community content is available under CC-BY-SA unless otherwise noted.