For another KOG game related to Grand Chase, see ELSWORD.

KurtzPel (Korean: 커츠펠, lit. KurtzPel), also known as KurtzPel -Bringer of Chaos-, is a 3rd person anime-inspired action battle game developed by KOG Studios which uses Unreal Engine 4 and their system called Toonline that generates an outline based on bump map, lightning and the model itself. It offers a diverse character creation and combination-based action combat applicable to their wide selection of PvE and PvP contents.

According to the game director, the game takes place in a parallel universe of Grand Chase after a certain point wherein major events and stories are depicted differently.[1] However, it is not a direct sequel to their previous title although it may seem to fit the bill.

『This world is built upon lies... Everyone must learn the truth』

Ancient KurtzPels, the legendary heroes of the past, were imprisoned inside the Tower of Gods during the Great Change that was caused by an evil deity. However, even after 400 years of their imprisonment, the Ancient KurtzPels' will live on through their descendants. They have created a KurtzPel organization called Chase, to prevent the oppressive Holy Bellatos Empire.

Now, as a new member of Chase, players must fight against the Bellatos Army and prevent them from spreading their religious dogma.[2]

A demo of the game, which was still under development at the time, was presented at the G★STAR 2017 trade show. Amidst a market that is aggressively migrating to mobile, Director Gwon answered that the decision to stick with PC was based on the will to uphold KOG's name in action games and the belief that quick and concise controls were essential to do so. They also chose to work with an engine suitable for multiple platforms.

When asked what kind of game KurtzPel is, the director said that it has KOG's proven action formula improved and claimed to cut out any Pay-2-Win systems. He stressed that the game is an action PvP game at the core and that related content will be developed first.[3]

KurtzPel is an online game where the player's character consists of three things: Soul (lore), Body (appearance), and Karma (weapon). The character has a base set of 3 special skills for each weapon, bound to E/R/F keys, and has a "rage skill" that activates when using Q key. The character can deliver various combos if the player chain up the base combos with skills and also have a dodge ability on Shift.[5]

The players can use an online matchmaking system to participate in various PvP Missions or fight against Epic Boss Monsters to practice their skills. The players can obtain and enhance their Karma and choose up to 2 Karma to take to Missions. As a Chaser, they will complete Missions in various places. The more difficult the Mission, the better rewards they receive. Missions are selected from the Mission Map in "Eltheca". Available missions change every day.[6]

In the game, Karma acts as a class role. Each Karma requires a different playstyle that is essential to have great teamwork. It is up to individual players whether they will focus on one, or be more versatile by switching Karma in battle. Also, it is something that can be shared with other users. This means it is possible to possess all existing Karma which can be trained further.[7]

Players can have 2 active Karma at their disposal to engage in battle and switch between them with the TAB key anytime, a function similar to Dual Wielding System in Grand Chase. Karma crystals can be attached to weapons and will decide their usable skills. To receive necessary equipment, talk to Heroes and raise affinity with them.

Players can obtain Missions from a Heroes of Chase NPC and receive important ones befitting their rank.

Ensher Renhart is the Commanding Officer of the Chase. She has no actual combat experience and comes off as shy and uncoordinated. However, she is an unparalleled tactical genius and demonstrates exceptional communication abilities.

When Ensher was young, she was rescued and raised by Chase Lieutenant Caljenin. Her Karma has already awakened but was unstable because she did not know how to control her power. Until she learned how to control her Karma from Caljenin, she suffered from hallucinations. When she finally stabilized her Karma, she entered Chase as Caljenin's assistant. As she weathered the harsh conditions of her training, she had gained everyone's trust, demonstrated the brilliance of her sharp intuition, insight, and knowledge of history, and climbed the ranks to succeed as a tactician.

"Don't just stand there, you idiot!"

Crim Plie is a high-ranking Chaser in charge of the Chase Intelligence Division. Her main mission is to travel the world, searching for the Ancient KurtzPel warriors who had vanished during the Great Change 400 years ago. When she's traveling, Crim is disguised as the lead actress in a touring theatre company.

Crim has been investigating the Tower of Gods for a very long time, as it's rumored to have imprisoned an Ancient KurtzPel during the Great Change. However, a family who held the location to the Tower is killed by the Bellatos Army for associating with KurtzPel, which leaves Crim no choice but to find another way to the Tower.

"True strength comes only when you have something to protect."

Ethan Soulguard is a high-ranking Chaser who acts as a bodyguard of Ensher. He is from the Northern Norbas Kingdom, where his skills as a swordsman were legendary even before joining Chase.

He searched for Chase for a long time before his Karma awakened. He was searching for an ally to drive the Bellatos Army out of Norbas Kingdom, and he believed that the Chase would help him, as he has witnessed the Chasers fight and has received help from them before.

When his Karma awakened, he joined the Chase and fought under Caljenin's squad. That's when he met Ensher. He began guarding Ensher, as she had no combat abilities. Even now, he is acting as her bodyguard.

Marian Vendor is a very powerful sorceress who used to belong to a powerful guild for magic casters called the Tyrion Mage Guild. She is in charge of Eltheca's Academia and is in charge of conducting and recording all research.

Tyrion Mage Guild is the most powerful mage guild in all of the Magic Kingdom of Benedia. As an exceptionally powerful sorceress, Marian was considered to be the Next Leader of the guild. However, when the Tyrion Mage Guild joined the Anti-Bellatos Alliance, the Bellatos Army annihilated the guild, leaving Marian as the sole survivor.

Her Karma has awakened when she was rescued by the Chase. She decides then to join the Chase and leads Eltheca's Academia with her astounding magic abilities. She hears a rumor that a blue-horned demon that controls the Great Beast appeared in the Kagor region. She believes the demon is somehow connected to someone in her past, so she decides to travel to Kagor to investigate.

"I was lost... looking for something precious to me something that I should have never forgotten. Now, even that feeling of preciousness is faint and fading away."

Lire Eryuell is an elf from Eryuell Island, also known as the Deserter's Island by other elves. She is an amazing archer who has forgotten her past. She was found on the shore 400 years ago without her memory of leaving the island. Her fellow elves were not aware that she has left, and Lire was left with an unknown feeling of emptiness. Whenever she would try to ignore that feeling, a fading memory of herself in an unknown place with an unknown person would haunt her.

Even Eryuell Island was not free from the Purification War started by Bellatos. To get rid of her feeling of emptiness and uneasiness, Lire joins the Anti-Bellatos Alliance with her fellow elves, but because of the sudden appearance of the Calamity, they all had to return to the Island without accomplishing anything.

To overcome her feeling of emptiness, Lire has left the Island once more to try to revitalize the Tree of Life in Eryuell Island. She comes across Crim and is asked to join the Chase. She refuses, not wanting to interact with the outside world, but Crim's words kept echoing inside her mind. Now she heads to the cursed floating island Del Lasa, where it was rumored to hold the Essence of the Tree of Life that can revitalize the Tree.

"Who are you... I don't remember, but I can't stop the tears from falling."

Jin was recently rescued by the Chase after being trapped within the Distorted Ruins within the Tower of Gods for 400 years. He is still unstable, most of his memories during the time he was an Ancient KurtzPel are now gone due to being stuck for a long time in captivity. Now, Jin is trying to find his lost memories to rescue other Ancient KurtzPel and fight against the Bellatos Army with his new friends in the Chase.

"Take your hands off me, before I cut them off."

Kien Astrea is a brilliant swordsman of the Chase that wanders Erthesia without a destination. Not much is known about Kien's past, but it is common knowledge that he is the son of Caljenin. Kien was trained at a young age by Caljenin and was known for his unsurpassed skill in swordsmanship. He is currently on a secret mission.

Kien's secret, reconnaissance mission is to seek out, identify, and gain intel on the ParazPel. The ParazPel are rumored to be secret, undercover agents, created by the Bellatos Empire to infiltrate the Chase as KurtzPel. The ParazPel are directly responsible for the horrible events that have occurred in Eltheca. Kien has been tracking down the organization to annihilate them.

When Lime was trapped within the Tower of Gods, she lived as a Holy Knight of Bellatos, which she found was similar to the faith of Roose Kingdom, a faith she believed in when she was a Knight of Roose Kingdom.

When she finally came out of the tower, she forgot her past as an Ancient KurtzPel, instead, believing herself to be a knight of Bellatos. As such, she heads to Bellatos and becomes the captain of Saint Serenity Knights that leads the Great Ascension.

Freya Schuhart is a Kalian that was born from Chaos. She is a Lieutenant of the Kalian Troops and has been observing the turf war in Erthesia. She later decides to make a move after receiving an urgent message from HQ.

Currently not much is known about Freya and the characters that follow due to issues in the KurtzPedia site and KOG not providing much lore content in KurtzPel since the January 15th update. Click the link for more info.

Dio Burning Canyon is a Kalian but part of a peaceful and non-destructive faction called the Moderates. He was trapped inside the Kardia Forward Operating Base by the Hardliners and was recently released. He is now waiting for the right moment in Erthesia to complete his objective.

"Your destiny is determined the moment we cross paths."

Adel de Floretta is the owner of a bar placed inside the Northern Island of Elenoa. Adel specializes in astrology and one day, she has a prophetic dream that involves Ensher and the Chase and decides to join the Chase.

"Student Council President is nice too, but it's great to be KurtzPel!"

Luna Erudon is the descendant of Ancient KurtzPel "Ronan Erudon" and the President of "Elludia Knight Academy" Student Council. During her boring everyday life in the Academy, she receives a divine revelation that informs her of her identity as a KurtzPel. She decides to join the group of KurtzPel called the Chase to escape from her boring life.

"Once the lightning strikes, only ash and wolf's howl is left."

"Are you the one who destroyed the forest?"

The teaser of KurtzPel. 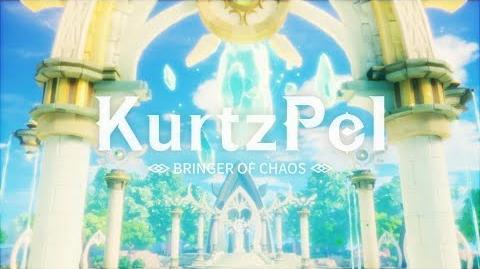 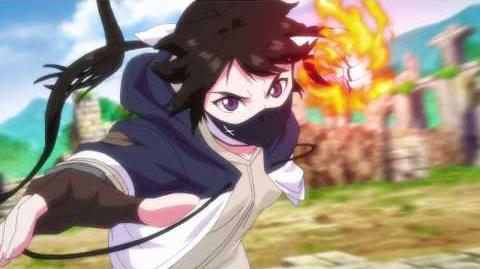