"The lady of Crimson River."

Power and influence had always been shared by a few powerful families in the Demon World. The Hardliners who desired Kounat's destruction realized after their defeat that they needed to grow their power by seizing it from the Moderates who do not desire all-out destruction thus they began to quietly cultivate their power. One day, the strength of the Hardliners suddenly overwhelmed that of the Moderates and their chief went missing.

For generations, the Crimson River family had struggled to bear children. When Ley was born, she was seen as a miracle to the family. However, Ley has soon diagnosed with an incurable disease and was not supposed to live for very long. Despite living with her illness, Ley grew up alongside Dio whom she considered her best friend. In her eyes, no one could mess with the "pushover" except herself. Her favorite pastime was harassing the young boy which was a normal friendship to the standards of Elyos, but Ley's disease continued to separate the two. She tried to hide her sickness but to no avail. Her illness had seemed to be related to her family's magical heritage. Ley had inherited the arcane power of the von Crimson River family but the power was absorbing her life force.

As Ley grew weaker and weaker, her desperate father called upon Oz to perform a forbidden ritual that would fuse her soul with the ancient warrior Edna Vervidad, who had fallen in combat. Those who paid attention to the growth of Ley in the centuries that followed saw subtle changes in her behavior such as her personal preferences changing and her newfound interest in magic. She went on to demonstrate an unexpected interest in fighting. However, as Ley was in her teenage years, this was seen as normal growth. As the years passed Ley was slowly cured of her illness and gradually began to resemble Edna, both in appearance and power.

After the war, Duel began seeking to ally with the families of the magic tribes which have previously attacked Kounat. But recently, the leader of the most violent faction disappeared and some Dimensional Portals to Aernas were reopened. Shortly after, Dio, the current leader of the Burning Canyon family, disappeared as well. Suspicious of the situation, Ley's father, Peter von Crimson River decided to send her on a mission: to go to the human world to find Dio and restore the alliance between their two families.

Ley is an Aquarius that has a strong sense of identity and only likes to think of herself. She dislikes those with childish behaviors and finds herself attracted to those that are mature and strong but in reality, she is a glass cannon damaged and fragile.

Having been praised as the young lady of the powerful Crimson River family, Ley grew up to be sophisticated and cultured. Despite her haughty and coldly aloof behavior, her faithful servants run ragged trying to please her. She does not like hands-on fights preferring to spectate them even though she does not admit so. Although she dislikes being directly involved in fighting, she quite enjoys being a spectator though her enjoyment is not betrayed outwardly by her emotions. There have been times when those around her suspiciously got into fights.

Ley has the unique ability to summon servants. She either summons them to use in her skills or as separate entities in battle. When summoned separately, these creatures have their own AI, freely moving like a dungeon monster. They possess an HP bar as well as movesets and special abilities. Summons will die if their HP bar is either depleted completely, their time limit expires (except Bastion Mary) or until Ley is defeated.

Garouille, Bastion Mary, Haunt and Jeeves can be summoned alongside Ley. When using skills, summoned entities consist of Bastion Mary, Jeeves, Taurus, Big Eye, Hate, and interestingly, Sebastian and Alfred which are both Dio's butlers. In Alfred's case, however, he appears to have a paper bag that covers his head. In battle, he replaces Jeeves in skills when already summoned and both butlers are called in Dark Matriarch's Flawless Attack.

Ley can only call upon 2 separate summons at a time. The player must choose between Garouille or Haunt and Bastion Mary or Jeeves. Summoning Garouille or Bastion Mary while Haunt or Jeeves is present will cause the latter to die and vice versa. 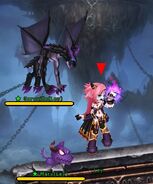 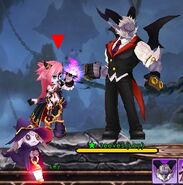 Ley can be unlocked by purchasing a Mission scroll from the shop and completing its objectives. 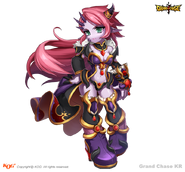 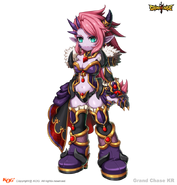 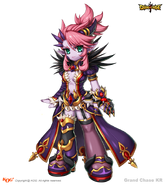 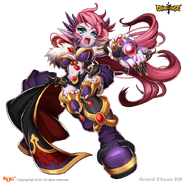 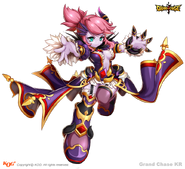 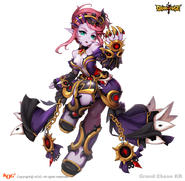 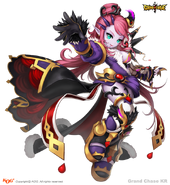 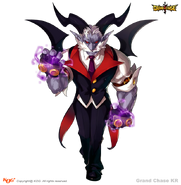 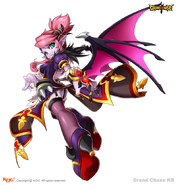