Ley had been born weak with an incurable disease.

Her father who was desperate to save her called upon the great wizard, Oz. Through the transplant of some ancient demon's core, Ley was miraculously able to survive.

When the core was transplanted into Ley, a ritual to summon the soul of the core's owner was performed. Because of this ritual, Ley now has another soul inside her.

That soul belongs to Duel's lover Edna and as Ley grew older she began to resemble Edna too.

With the disappearance of the chief of the Moderate faction and the influence of the Hardliners faction becoming more powerful, the chief of the Crimson River family felt that something suspicious was going on. He decides to send his daughter Ley to Aernas in search of their ally and the chief of the Burning Canyon family, Dio.


The top predator of the Demon World kindergarten defeats everyone.

Ley: Those were the good old days. 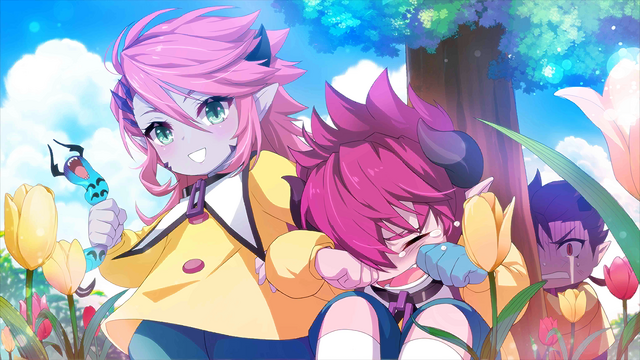 "Hehehehe. Take a closer look at it. I told you it's adorable."

Dio was disgusted. But Ley didn't shove away the insect that she put in front of his face. At first glance, she seemed to be showing off the insect she caught... However, Ley was not amused by her catch... She was enjoying Dio's sobbing. It was obvious that Ley was enjoying what Dio hated!

"Crimson River and the Burning Canyon... Weren't they in alliance?!"

If that's how she bullies Dio... Then what about me? What's... going to happen to me? Karp, who challenged Ley without knowing the consequences, had tears streaming down his cheeks.

Ley: Don't you dare to drop out.

Ley: I'll invite you to my reunion!

Dio: Why are you looking around? Is this the first time you've ever seen such a big mansion?

Karp: H-Hey, who said I was looking around? I'm Karp Dryfield! I'm from the second most well-known family in the Demon World!

Karp: How dare you insult my family? The Dryfield mansion is as fancy as this place! Well... You wouldn't know if you didn't come to the reunion when my family hosted the event. I understand. I was being mean to you when I was a kid... Of course, you won't feel comfortable facing me.

Karp: You son of a...! Stop pretending you don't remember!

Dio: I don't remember at all. Don't speculate based on not being able to attend the reunion. I'm a very busy man.

Karp: Are you acting pompous because you're the head of the Moderates? You're just a crybaby Dio!

Dio: What are you talking about? That's so long ago. Rather... you were the crybaby in my memory.

Karp: A new world? It was you who was always crying, Dio! You burst into tears when Ley bullied you!

Karp: W-Wait, let's have a truce. I just remembered something I wanted to forget.

Ley: Dio! You should've told me if you're here! Huh? Who's that with you?

Karp: D-Dio! I was wrong! Don't introduce me to Ley!

Dio: Gosh... You don't even have the confidence to face Ley. What nerves do you have to show up at the reunion?

Ley: Professional wrestling is all about teamwork!

Ley: Sure whatever, Birdman is coming!

Ley: No! That's not it! Haunt! That's not how you do it, you know? The beauty of professional wrestling is about teamwork, okay? Teamwork!

Ley: Glad you're here, Dio! They can't do it no matter how hard I teach them. Let's show them a demonstration!!

Dio: I don't think that's a good idea. Have you forgotten the warning, "Don't try this at home"?

Ley: Of course, you shouldn't try this at home! But isn't that an exception to us who once dreamed of becoming professional wrestlers? Get ready!

Ley: Hey! Did you forget your dream of becoming a pro wrestler?

Ley: Ow ow ow ow. What are you doing? That's not teamwork! Did you forget? Then I'll make you remember! You may have forgotten, but... your body will remember your childhood dreams!

Ley: I thought it was a terminal illness, but I guess it's all good now?

Dialogue
Peter: It's the worst. He made many sacrifices to lead the Ancient War to victory. Because he believed that everything would be fine once he won the war. Oz: ...... Peter: But the reality was cruel. Werner died by himself alone, Heitaros decided to organize the Hardliners out of the blue, and the last survivor of the Ancient Demons destroyed half of the Demon World. Oz: On top of that, the successor to the Crimson River family has her life at risk. Peter: Yes, there's a lot of problems. So please don't cause any more problems, Dr. Oz. Don't give me more headaches. That's my request. Oz: It was my mistake that I accepted Heitaros' support. To be honest with you... I don't know how to fix it. Only if you... help me. That will give me a clue. Peter: Are you telling me to... create a clash between the Moderates and the Hardliners? Oz: Just buy me time. Then I'll take care of the rest. Peter: I'm speechless. Oz: If you do that for me, I'll save your daughter. Peter: Is there a way to save Ley!? But it was you, Dr. Oz, who diagnosed her as incurable? Oz: There's no cure back then. But I have it now. That's all. Peter: Can she really be... cured...?

Oz: It's up to you, Peter von Crimson River.


Memories can be erased, but emotions can erupt.

Ley: That's weird. Did I have an appointment? I can't remember...

Nelia: How pathetic. I thought you could fight more. Where did that mighty last warrior of the Ancient Demons go? ......Did you really give up? Didn't you say you'd hold out until the Demon God comes back? Make me more entertained! If you don't get up... This is really going to be your last.

Ley: What! There's no one? Crimson River Maid: You wanted to come, didn't you?

Ley: Oh, whatever! It's because... I felt like I had to come here! I have to meet... Crimson River Maid: Pardon? What did you say? Who are you going to meet here?

Ley: Meet who? Crimson River Maid: You just said that, didn't you?

He Can't Be There Without Me


Dio went missing in Aernas. Then...

Ley: If you made a promise, you should keep it!! Dio!

Ley: What? Did Dio go missing? Peter: Don't worry too much. There's an old saying "No news is good news". I'm sure there will be news soon.

Ley: I did as he told me. But sitting still and waiting is not my cup of tea. Dio claims that he's the head of the Moderates, but he's just a kid in my eyes. Crimson River Butler: It's the same with you...

Ley: What can he do without me? Aernas... That's the place, huh?


Duel told Ley that she resembled someone he knew.

Ley: N-No. What are you doing all of a sudden?

Mari: I should have been prepared to encounter Duel. It's my fault.

Lire: Did you know about Duel?

Lire: I'm glad he came to his senses right away, but he raged like... a wounded beast.

Ley: I told you not to worry. I was careless before, but... If Duel shows up again, I'll take care of him, so don't worry!

Mari: Alright. Hopefully, you won't bring up the weather next time.

Lire: That's rare. I've never seen Ley so flustered. I guess it can't be helped because the opponent is Duel.

Ley: W-Well... He didn't feel dangerous at all! He felt like a wounded and exhausted animal from falling out of a herd? Didn't you say that you felt the same way?

Lire: Pardon? That's true, I guess? But Ley... Didn't you say you don't like animals?

Ley: Huh? Oh... I guess? Why did I do that? Why didn't I feel like he's an enemy to attack? He told me I resembled somebody else... Who's he talking about? I don't think it's about my father...

When the Coin is Flipped


The front and the backside of the coin cannot coexist together.

Ley: I won't let you take over my body.

Ley: This voice... It doesn't feel strange at all. Who are you?

Ley: Ugh... What's happening to me? I feel like I'm about to fall asleep because my consciousness keeps getting blurred. Edna: Don't struggle. Just fall asleep.

Ley: Who are you? Edna: You don't need to know. You and I are two sides of a coin. There should never be a case where we would encounter each other. It's my turn now, so you should go to sleep.

Ley: What are you talking about? Edna: Okay. Since we'll never meet again, shall I introduce myself? I'm Edna, the Ancient Demon.

Edna: Understand? You wouldn't have survived without me. Don't feel resentful. I'm just getting back what belongs to me.

Ley: Getting back what? This is my body! You were the one who died in the first place! Edna: I'll take your body as an interest payment. It would cost a thousand years... Do you understand how much that would be?

Ley: I don't have any debt to pay to a bankrupted person!

Edna: It's cute how you're aggressive. But that's where your struggle ends! 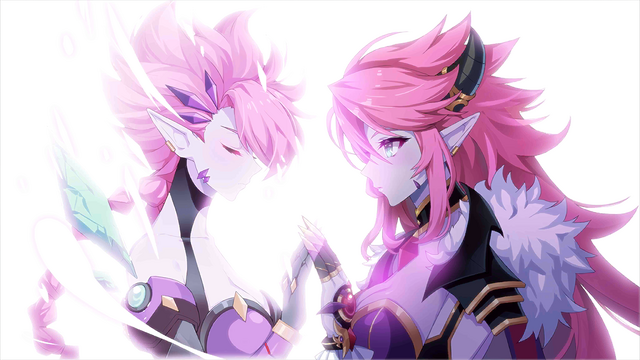 Ley: The reason why my heart is beating healthily, the unknown feeling that I felt when I encountered Duel, now all the questions have been answered. However, even though all the questions are resolved, I don't feel relieved.

"It doesn't feel relieved even after the mysteries are solved..."

Maybe... It's because her emotions remain in my heart like a physical illness. But I'm... I'm Ley von Crimson River. I'm not Edna.

Nothing has changed. I don't have to be responsible for their misfortune. It's not like me to hesitate and worry because of sympathy.

"Have sweet sleep. I'll at least... give your regards."

A sphere that can contain a massive amount of magical power.

A person could never possibly wield their strength flawlessly. Sometimes you would apply too much power and end up wasting it. What if you could store that power instead of wasting it?

Ultima was created on that exact idea. However, it is no longer in production as it was too powerful. Why was it considered too powerful? Think about the demons that live an eternity and can store all the power their wield in that artifact, the outcome would be catastrophic.

Jeeves
(Default summon)
Add a photo to this gallery

Hate
('Evil Lord' summon)
Add a photo to this gallery 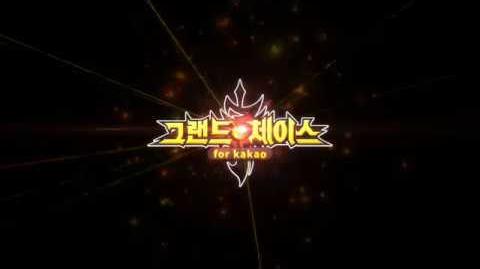 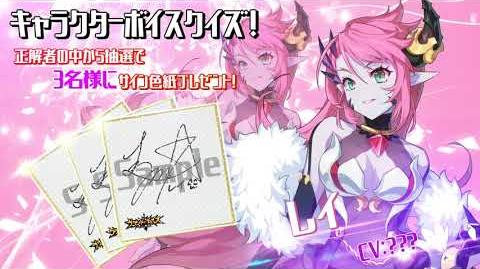 Retrieved from "https://grandchase.fandom.com/wiki/Ley/Grand_Chase_Dimensional_Chaser?oldid=81430"
Community content is available under CC-BY-SA unless otherwise noted.