"The girl who turned into a vampire."

Should I have listened more carefully to my friends...? As Lilia's mind starts becoming hazy, she thought of the words her friend had spoken to her... Her throat began to bum with an insatiable thirst, but no matter how much water she drank it could not be quenched.

She instinctively realized the change that had happened inside her body. She wanted blood. Fresh blood... Warm, hot blood that slowly oozed out of pierced skin...

"Lilia. What are you thinking about?"

At Dmitri's question, Lilia came back to reality. She had been remembering a time when she had become a vampire. A time that had long since passed. Now she lives a happy life as an attendant to a prestigious house of vampires.

"They say vampires appear there, so you must be careful!"

Lilia can be fought as a mini-boss in Act 2.3: Vampires!

Lilia utilizes the same attacks she has as a playable character. 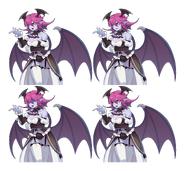 The expression system of Lilia.

Retrieved from "https://grandchase.fandom.com/wiki/Lilia?oldid=77187"
Community content is available under CC-BY-SA unless otherwise noted.