There was a small island nation called the Great Roose not far from Bermesiah. The people there have always been worshipping the God of all beginnings and were ruled by the Pope for generations. From some time ago evil forces that have been shut inside gates around the whole continent began leaking out. Pope St. Constantino who sensed the invasion of the Elyos tribes declared war and sent out the Holy Knights to the continent.

Lime, a member of the Holy Knights, comes over to the continent with her fellows and succeeds in closing a few gates. However, she gets separated from her comrades during a battle and gets lost. She comes across the Grand Chase by chance and gets saved.

Lime is pure, full of passion, and loves justice. She never listens to anyone when she is fully immersed in carrying out justice.

Created to be a defensive character, Lime is equipped with several auras to make up for her lack of mobility. Her auras grant her useful buffs or enhancements to her moveset, making her all the more formidable to her enemies. However, this also depends on what auras she obtains as she can only have 3 of the 6 available auras. Auras are divided by her jobs Holy Knight and Saint since the auras act differently. Holy Knight emits an aura that buffs herself and everyone in a set radius and Saint uses a self-aura that enhances her abilities.

As a Holy Knight

Lime emits an aura from within herself and equips a buff. Any teammate that is within the radius of the emission will also receive the buff. 2 of the 3 auras for the Holy Knight, however, stops MP from recovering.

Lime takes on a different type of aura called "self-auras" which are beneficial only to Lime herself. She changes her moveset abilities based on what self-aura is triggered.

Lime can be unlocked by purchasing a Mission scroll from the shop and completing its objectives. 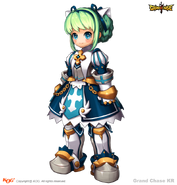 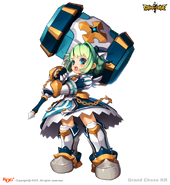 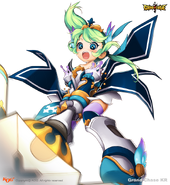 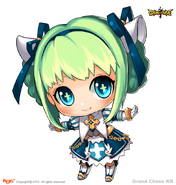 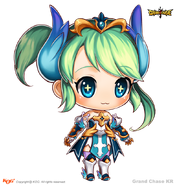 Lime lost in the deserts of Bermesiah.

Promotional artwork of Holy Knight in the Twelve Disciples update. 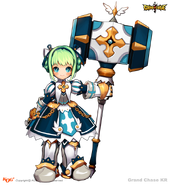