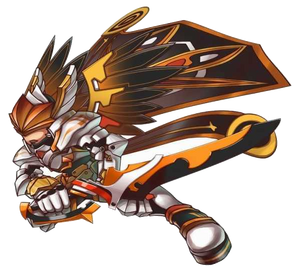 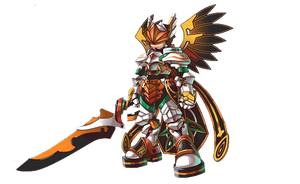 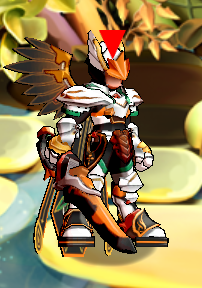 Magnus Dan or just Dan is a hero of the Druids, who had powerful magic and swordsman abilities known over the lands. Eventually he grew too old to fight, but also felt that the demise of Druids was drawing nearer, so he required someone to succeed him.
He sent a test to many Sentinels and Vikens. However, when they returned, only a few survived and those that did were too frail to receive his legacy. All hope seemed loss, until Dan took note of Ryan, and immediately picked him as the successor, and entitled him as the Vanquisher of evil. He also gave Ryan the ability to change himself into Dan's form.

Dan is capable of using multiple sword slashes and thrusts and keeps the use of Mach Blow like the Vanquisher. He is also capable of performing 3 different levels of skills as well.

Unlike the Wolf or the Nephilim, the transformation of Dan lasts infinitely long (even through portals) until the user dies, removes the transformation, or the match has ended. It is not required to buy Magnus Dan as it is already equipped. If any Wolf form skill is equipped the Wolf form will replace Magnus Dan. The

command is used to transform back into Ryan. Similar to Wolf and Nephilim, he gains health when transformed depending on how much current vitality the user has. He also projects a shockwave upon transformation.

He has no buff, although because of his height it makes him ungrabbable. 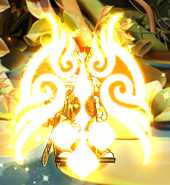 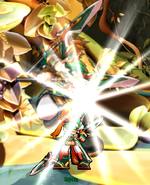 Magnus Dan Detransformation
Add a photo to this gallery

Lord of Valhalla
Add a photo to this gallery

Retrieved from "https://grandchase.fandom.com/wiki/Magnus_Dan?oldid=58731"
Community content is available under CC-BY-SA unless otherwise noted.