Alive
Marcus is a Bounty Hunter from the Wilderness who led the Haros Justice Army to revolt against the Underworld regime.

There is nothing else known about Marcus other than being a commander in the Haros Justice Army.

After they witnessed the Grand Chase put a stop to Changhae and his Underworld soldiers, Marcus stressed that there was a demon among the group and urged General Russell to be on their guard. When asked to introduce themselves, Marcus claimed that Rufus has been getting requests from high-rank officials, suspecting him of being associated with Heitaros.

As Eva and Brady grumbled about the general's faith in Rufus and the intentions of the Queen, Marcus thought that they might be able to turn the situation around with the help of Tristan. When asked if he meant it, Marcus feared that they might not have a second chance and did not want to miss the opportunity. Later on, Marcus fought alongside Eva and Brady as gate soldiers poured in their village.

General Russell received a message from Marcus saying that they would attack the empty base while the enemies were gone, claiming that it should affect in blocking their retreat. Although Russell was dubious of Marcus' decision, they proceeded in finding Her Highness.

Changhae returned to the Gateway Base only to learn that it now became Justice Army's fort and Marcus drove him away with his troops. The commander then admitted to using the Queen as a bait for his strategy. Hwarin made Marcus promise to never fight a Haros again but he spat the Queen by saying that the people from the Wilderness may not think that they were under her rule.

As the revolution started forming to endanger Her Highness, the Grand Chase sought help from Marcus who was missing in action.

The group confronted General Russell who did not stop Marcus prior as they believed that it was not the will of the commander to cause chaos in the Underworld and Tristan brainwashed him.

When the sun came up, Marcus commenced the Haros Justice Army to follow. Rufus asked the commander if he truly wanted the revolution but Marcus reckoned that General Legis would have done the same thing. Afterward, he criticized the city people for treating them like criminals whereas they only fought to thwart the conspiracy of demons in taking over the Underworld.

In the end, Marcus realized that he was tricked by Tristan but asserted that his hate remained toward the royals in Underworld City. As the Queen decided to settle the dispute between them, Marcus was obliged to protect Her Highness.

Marcus led the Justice Army alongside the Queen against the demons of Heitaros that infiltrated the Underworld City.

Marcus and Changhae started bickering after the commander shamed the First Lords for trying to take all the credit in helping the Queen sneak inside the Tower of Memories.

Marcus cheered for Legis Wilde as the Queen called for everyone to honor the name of the general who made the first resistance. 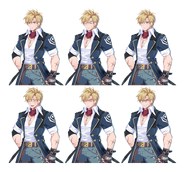 The expression system of Marcus.