from the Underworld (formerly)
from Silver Cross

Alive (as a human)
Melanie Wilde was a demon from the Haros tribe who reincarnated as a human after her death.

There is nothing else known about Melanie during her days in the Underworld as a Haros before she died of illness. As a human, she was ostracized even in exile for giving birth to an ominous child that had a hideous appearance, a side effect of being a half breed. Melanie eventually abandoned Lass after enduring all that she could.

Melanie neither appeared nor mentioned in the original game and was only seen in her concept art.

A sickly Melanie, when she was still a Haros, appeared in a brief textless cutscene that took a peek on Rufus' past. She was seen confined to bed by sickness.

In a flashback, a young Rufus told his mother that the outside air was not that good but Melanie said she was feeling better that day. As her child got quiet for a moment, Melanie asked if he has something to say though Rufus just ignored it and invited his mother back inside after getting some air. Realizing that Melanie was waiting for someone else, Rufus nagged his mother to forget that person and claimed that he is not going to return.

Going further into the Tower of Memories, the Grand Chase saw the illusions of Melanie and Legis whom she finally got to see as of the event shown in this memory. While Rufus thought that it was his mother's memory, Lass seemingly got taken aback by what the Bounty Hunter said although he chose to set it aside.

Another fragment of memory manifested itself to the Grand Chase showing Melanie now as a human with the young Lass. Then it shifted onto the falling-out between Legis and Tristan where Melanie was trying to stop the two. Tristan provoked Legis that Melanie should thank him as he let them meet again. At this moment, Legis fathomed that Tristan used his wife to catch him and the Bounty Hunter admitted to resurrecting her himself. Melanie protected the kid from Tristan after he threatened Legis of taking out his anger on them.

Ruffled by Tristan's words, Rufus let him know that the only thing the Bounty Hunter is allowed to do was ask for forgiveness from his mother. 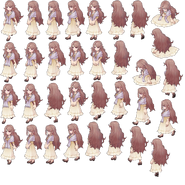 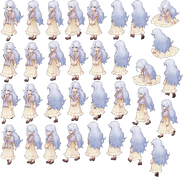