Unknown
Mercuria is a gigantic monster that can be fought as a Dimensional Boss.

There is nothing else known about Mercuria although she is believed to have been lurking beneath the waters of Beroiah or the seas nearby.

Mercuria neither appeared nor mentioned in the story of the game. 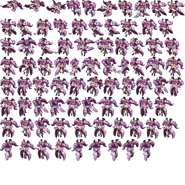 Retrieved from "https://grandchase.fandom.com/wiki/Mercuria?oldid=81857"
Community content is available under CC-BY-SA unless otherwise noted.