Before he was killed, Asin Tairin told his student about the traitor Victor and the greatest warrior he had tried to become, the Rama. After burying his master, the boy who now calls himself "Asin" heads towards Victor's Fortress to find Victor and train his powers to those of a Rama. By then, however, Victor had already been defeated by Jin and the Vajra, the weapons needed for one to become a Rama, were gone.

After traveling for a long time, Asin finally meets the Grand Chase and tells Jin that their master is dead. Asin then threatens Jin with the intent to become stronger and surpass him.

Jin Kaien who is a warrior with a pure heart and true strength tells Asin everything he knows but like Victor, he fails to become a Rama as he is only focused on getting more power. Instead, Asin takes the skills he learned from his mentor and Jin's knowledge to train and increase his powers. He adapted an entirely new fighting style that is uniquely his own thus becoming the Mugen. 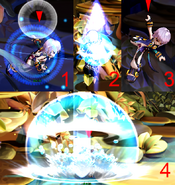 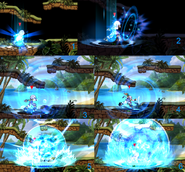 Circle of The Heavens
Add a photo to this gallery

Retrieved from "https://grandchase.fandom.com/wiki/Mugen?oldid=76082"
Community content is available under CC-BY-SA unless otherwise noted.