Alive
Myst is one of the Four Demon Kings in Elyos.

Myst is among the Demon Kings that stood out during the Ancient Demon Wars. Despite being hailed as such, he is an Abaddon like Lapis and prefers not to be involved or associated with matters concerning demons or the Demon World.

Shortly after the war, Myst hid in his underground labyrinth for the longest time which earned him the nickname 'Secret Demon King'. 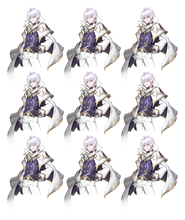 The expression system of Myst.

Myst as he appears in World 10.