About 500 years ago, the destructive forces of Heitaros and his troops invaded Kounat without hesitation. However, due to Aernas Hammer, the majority of his troops disappeared and Heitaros as well was left with a fatal injury.

During this process, many demons either died by the hands of Heitaros' troops or escaped while leaving behind their weapons. The Magic Engineers of Kounat called these weapons magitech and began to research them. In the beginning, instead of containing a powerful force, the magitech devices contained demonic energy that would eat away at the user's life. Over time, they were able to weaken the power and made it safe to use.

Nia's Railgun is one of the most powerful weapons that had taken the lives of many of its owners. Though at this point, the combination of Nia's accuracy and the deadly power of Railgun, has taken down even more enemies...

One day, she may lose her life to Railgun's demonic energy. But, at least for now, the Railgun is the best partner for Nia and she is well aware that as long as she uses it, she came no promises for tomorrow.

Nia can be fought as a boss in Act 13.6: Grandiel's Residence and uses her designated skills as a unit. She reappears as a mini-boss in Epilogue 3.2: The Execution. 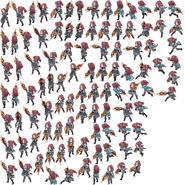 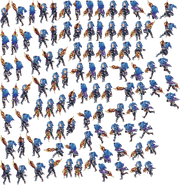 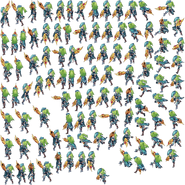 Retrieved from "https://grandchase.fandom.com/wiki/Nia?oldid=81517"
Community content is available under CC-BY-SA unless otherwise noted.