"The guardian of the Beroiah seas."

Mission Day 1. Received intelligence that Claw Pirate Crew was planning to raid Beroiah. I left as soon as the command was issued by headquarters.

Mission Day 2. Foggy. In the early morning, a scout informed that the enemy's had a large number of ships and that the men were trained well. One wrong move could end with the army's defeat. Hearing this I spoke angrily, "Since when did a scout begin to decide whether we would win or lose our battles? It is my judge to make that decision. All you should be doing is informing me of what you saw and heard!"

Truthfully, I had already known that we were at a disadvantage. If we were to continue, I would just be sacrificing the lives of my men. However, if we were to retreat the lives of the citizens in Beroiah would be in great danger. If I had been alone, I would do what I needed to do without hesitation... It seems that tonight's sleep will not come easily.

Mission Day 3. Sunny. At dawn, there was a guest who came to our unit. Due to the lack of sleep, I greeted him absentmindedly.

"The name is Hekar. I am the Vice-Captain of the Claw Pirates." The name of the shark Fishman who introduced himself was Hekar. He explained that when the sun rises tomorrow, Captain Claw would be attacking Beroiah and that today is the only day to stop him. He also informed us that, even though the Claw Pirates were great in number, they lacked solidarity. So if she were to ambush them tonight and subdue Captain Claw, many of them would be running away. For the infiltration operation, we decided to go with a small elite group with myself included. My men said that there could be a chance that this was all a trap set by Captain Claw, but I decided to believe in the truth that I saw in Hekar's eyes. Also, it is because of what he said when I had asked him why he was helping us.

"Tomorrow, Captain Claw intends to kill as many humans as he can get his claws on. I... I don't want to kill innocent people."

Mission Day 3. Night. Clear. As the short phase of the moon disappeared, Hekar and I headed towards Claw's flagship. Security was light because of the banquet being held the night before their invasion.

"Are you experienced with using a sword?" "Have not lost yet." At my answer, Hekar laughed revealing his teeth as if pleased.

"Great. Attack to your heart's content I will defend you..."

Hekar drew the giant anchor and pushed it forward. That is now the long dawn began.

Mission Day 4. Clear. As Hekar predicted, once Claw had been captured, the rest of the pirates scattered. The men who had been ready to die at sea, cheered loudly when I arrested Claw. Though Claw had been jumping around screaming that Hekar was the traitor, he soon calmed down and didn't speak a word.

"I, too, am the vice-captain of the Claw Pirates. Go ahead and arrest me too..."

Though Hekar lifted his hands towards me, I turned around before I could see.

"If we treat important informants that way, then who will ever come forward... Quietly leave this place."

When Hekar heard my words, he softly laughed. Rather than arresting him, I honestly just wanted someone like Hekar as a subordinate.

"If you ever have thoughts of becoming a soldier, come to find me. I would be happy to have a boatswain like you..."

Hekar was locked in thought as he looked out to the sea.

"I... I want to be a warrior and protect the person I love."

After speaking those words, Hekar jumped into the sea. A warrior... He said something that could be a bit embarrassing with confidence but it was because of how he is, that he was able to risk his life to stop Claw. I'm sure he will become a great warrior.

The expression system of Olivia. 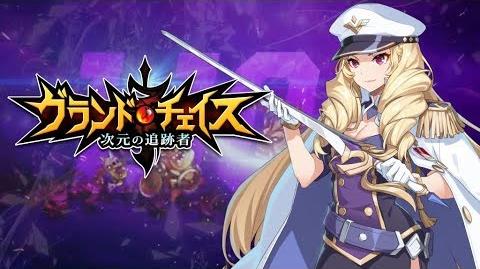 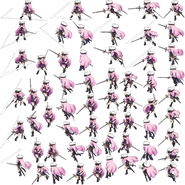 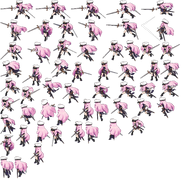 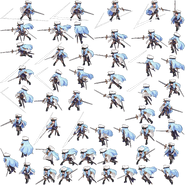 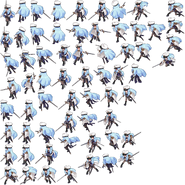 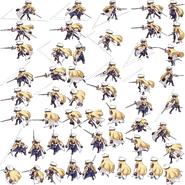 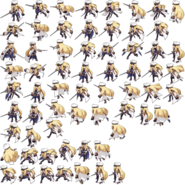 Retrieved from "https://grandchase.fandom.com/wiki/Olivia?oldid=82400"
Community content is available under CC-BY-SA unless otherwise noted.