The Orc Lord is the head orc that is fought as a boss in Orc Temple. He reappears as one of the minibosses in Battle for Bermesiah.

There is nothing else known about the Orc Lord other than being the headmaster behind the orcs that were rapidly attacking Serdin.

Knight Master Isolet stated to the Grand Chase that the Orc Lord was given some great powers by Kaze'aze and was the one behind all the attacks in the Serdin Kingdom. When the head orc himself was confronted to stop doing his evil deeds, he challenged the group to defeat him.

Much to their confusion, the Grand Chase stumbled upon the Orc Lord on their way to Bermesiah who was claiming to be reborn as a servant of the "great one". Lire felt a particularly violent aura, unlike anything she had felt before, coming from the head orc and warned the group to be careful.

The Orc Lord was seen talking with Vice about how the magician was right that their precious guests would try to escape and not wait for the headmaster, much to his pleasure. He challenged the humans to fight him after they attacked his orc army.

In the end, the Orc Lord was defeated once again with him lamenting that he had not even fought a Druid yet. Then it was revealed that the head orc was one of those affected by the erosion of souls.

The Orc Lord has a variety of attacks. He sometimes does a combo on the players. He also has a quick jump attack which damages players if they do not jump. Sometimes the Orc Lord does a combo followed by a slam to the ground with his hammer, causing a small earthquake. Also, he sometimes attacks the ground, sending out spikes of rocks in front of him.

When fought during the Battle for Bermesiah, the Orc Lord can spawn Orcs.

The Orc Lord can be fought as a boss in Act 24.6: Fight Against the Strong. 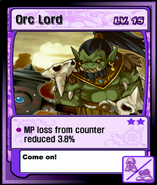 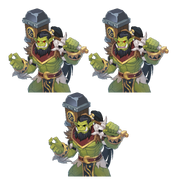 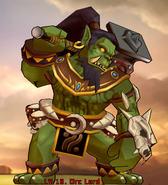 The Orc Lord in Season 2.
Add a photo to this gallery

Retrieved from "https://grandchase.fandom.com/wiki/Orc_Lord?oldid=81986"
Community content is available under CC-BY-SA unless otherwise noted.