Alive
Pan is a timid Silver Knight trainee who had been unaware of the onslaught in their headquarters until he found the Grand Chase.

He appeared in the game as a Quest NPC for the Silver Land region.

There is nothing else known about Pan other than being a trainee under the Silver Knights.

Although he does not appear in the story dialogues, Pan interacts with the Grand Chase and, at times, to the players themselves in the mission board.

Pan was encountered by the Grand Chase who was also looking for them after sensing the extremely unstable and violent energy of evil in the area.

Pan was confused and devastated when seeing the headquarters of the Silver Knights in ruins. As he requested, the Grand Chase explored the area in hopes of finding his masters.

Pan warned the Grand Chase that there were a lot of dangerous monsters residing within the area, some of which could generate electricity.

Pan was afraid that something may have befallen the legendary King Guang and hoped that his feeling was wrong. He realized that the fairies had become aggressive, urging them to defeat them to meet the blue dragon although he was conflicted about doing it himself.

Without a boat to ride on, Pan suggested that the group must pass through the Primeval Island and make their way to the south end of the continent.

Pan said they had to pass through King Fang's Lair when heading to Ellia. He noticed there was something weird going on and admitted that he did not know much about the place or the enemies that would appear thus he advised everyone to be careful.

Worried that the monsters would make King Fang angry, Pan sought help to stop them from taking over the red wyrm's domain.

Scouting the area, Pan wondered if the fortress had always been there as he had never seen the place before. He also did not know the Black Knights and thought they must have come from a different continent, therefore, he demanded to take them down so that these soldiers could not come back to Silver Land ever again.

When meeting the humongous Black Tempest, Pan questioned if they could even beat that thing. 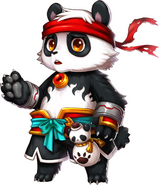