Paradom (Ancient Paradom in the latter) is the boss of Forgotten City and is a mini-boss at the Kastulle Ruins Upper Floor. There is a later model known as the Magma Paradom.

The Paradom is a giant diamond shaped machine that only shoots out a pink laser. Paradom's basic attack is not very hard to dodge but keeps players on their feet. Paradom will rotate about 45 degrees to fire its laser in 4 directions, each parallel to the slot in its body. Then it will rotate back to its starting point and will fire the lasers once again, except this time its lasers will go up, down, left and right. It sometimes goes to the top of the screen and shoots a beam out below it and goes from one side to the other. Another attack is signaled by the words 'DANGER', and then Paradom shoots out a large, damaging beam horizontally, only dodgeable by a skill, hiding behind the boss, or by jumping on a platform above or below the boss.

Paradom has a fourth move, but it isn't an attack. Paradom will make a pulsing mirror in front of it that reflects most projectiles or pet attacks which may possibly harm and/or kill allies or yourself. It cannot use any other move with this mirror up. 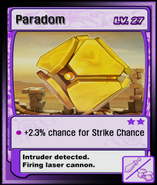 Add a photo to this gallery
Retrieved from "https://grandchase.fandom.com/wiki/Paradom?oldid=61857"
Community content is available under CC-BY-SA unless otherwise noted.