The Serdin Park is an area of Serdin where players can run around and chat while assuming the persona of one of their characters. Characters appear in the armor they are currently wearing, with their pet and the elemental effect of their necklace; however, if the 'low' tab is chosen before entering the park, all characters will appear with no armor and the base weapon for their class.

The following actions are restricted in the park:

The park is neither part of the PvP nor the Dungeon functions of Grand Chase, but players can still receive invites from players in PvP/Dungeon rooms.

Players can zoom in on their player in the park by scrolling with the mouse. 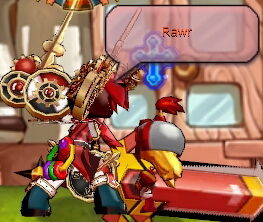 Use the command "Enter * (Insert message)" while in a park.
Note: There is a 1 minute cooldown time between outcries. 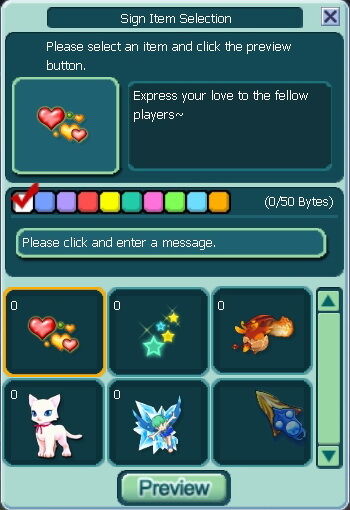 Press the star symbol next to the chat box.
Shouts can be bought from the shop. Every shout performed consumes a Shout.

Players may form a partnership through the park. One of the players must buy a ring from the shop with either GP or Cash. The player must then right click on the partner and select "Become a Couple".

If a cash ring is used, an announcement of the new couple will be made on all channels.

A couple can break up the same way as coupling, by selection "Break up" instead, or by viewing the friend list, right-clicking the name of the coupled player, and selecting "Break up".

Couples are rewarded with bonuses when they stay together for a long time, and get to access the Couple Window, where a character chosen by each player stands side by side. The characters can perform an action chosen by the numbers above the characters. New actions are unlocked depending on how long the couple has stayed together. The same number will activate different actions depending on the genders of both characters, for a total of three different actions on one number.