Partusay was the ocean god that is fought as a boss in Partusay's Sea.

There is nothing else known about Partusay other than having the seas nearby the shores of Ellia Peninsula to his name.

The Grand Chase sailed to Ellia when all of a sudden an illusion of Kaze'aze in a young boy's form appeared and sunk the entire ship deep down the Partusay's Sea. Under the sea, Eluna explained how she ended up in the area by following the dark mana and told them to get out quickly before they incur the wrath of the ocean god Partusay. They ran into Partusay himself, however, he refused to let them pass, leaving the group no other option but to fight him.

The fight consists of, in a way, three parts, all at once. This is because players must fight three parts of Partusay at once: his head, arms, and legs.

His head consists of only one attack, but players must deal with a finishing blow to his head to fully beat him. The head of Partusay shoots out a laser occasionally as the only attack. An indication that this attack is coming is when the screen turns a shade darker, also, the crystal on his forehead will show a twinkle before the laser is shot. Once the arms are destroyed, players usually have to jump to attack the head.

His arms do one of two attacks. One of them is where he stabs the players on the platforms with his trident. They also can summon whirlpools similar to the Mini Ice Golem's whirlpool. The whirlpools all spawn in the same place no matter what.

All his legs do is simply create an earthquake. However, there is no warning as to when the attack happens, so players attacking his arms or head may not know when to dodge until it is too late. 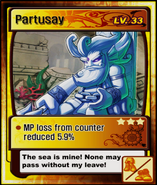 Partusay in Grand Chase Dimensional Chaser.
Add a photo to this gallery

Retrieved from "https://grandchase.fandom.com/wiki/Partusay?oldid=79973"
Community content is available under CC-BY-SA unless otherwise noted.