Alive
Pelles is the Arch Mage who led humans to victory in the Great Demon War a thousand years ago.

Pelles is an immortal being that originated from the celestial world. He who was not supposed to meddle in human affairs has been punished by the gods and turned his body into a childlike figure. Pelles is extremely powerful as an Arch Mage that no human can compare. It is believed that the world would have been destroyed if he had sided with evil.

Pelles neither appeared nor was mentioned in the original game. However, the character was seen in Grand Chase: The Cellular Game. 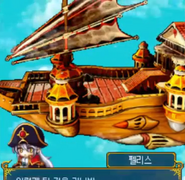 Pelles in the manhwa.

Pelles in the past.