"The Boxer who never gave up."

Pepe dropped his head. After a long time of living abroad, Pepe had returned to his hometown only to find no one there to greet him. Everyone that he knew had lost their lives to the killer, Kyle. Sadness and anger enveloped him. More than anything he resented himself for being powerless and not able to do anything against the killer Kyle. And with that Pepe continued to spend his days in sadness.

One day, a raccoon who introduced himself as Rocco spoke to Pepe. For what reason would a raccoon speak to a mushroom?

"Do you want to get revenge on killer Kyle?"

At the sound of Kyle's name, flames rose up in Pepe's, once, dead eyes. Kyle! He would give anything to be able to get revenge on killer Kyle.

"So how about it? How about joining me? With my coaching, I'll have you become the country's best box... No the world's best athlete."

"I will bum it all down for a chance to get my revenge!"

From then on, Pepe started his fiery training with Rocco.

Pepe can be fought as a mini-boss in Act 1.3: Where the Meteor Falls.

Pepe utilizes the same attacks he has as a playable character. 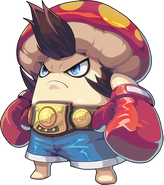 The expression system of Pepe.

Boxer's Spirit icon.
Add a photo to this gallery

Retrieved from "https://grandchase.fandom.com/wiki/Pepe_(Kricktria)?oldid=81624"
Community content is available under CC-BY-SA unless otherwise noted.