Pino is a disciple from the Creator's Morning that served as a guide for the Grand Chase into the Temple of Time. His seemingly gentle personality was revealed a facade later on and in reality a close henchman of Heitaros Cratsus.

Nothing else is known about Pino other than his desire to become a missionary and travel the world although it is likely just a part of his act.

Pino met the Grand Chase within the Airship Port and they gave him the artifact which will be delivered to the Creator's Morning. Unbeknownst to him, it was actually an imitation that functions as a GPS device which would reveal the location of their hideout. Already distressed about the commotion, Pino then realized that they are the wanted criminals from Mouspia after they were noticeably sought by guards.

Pino eventually left the group as he reunited with Father Nachoel and Sister Tacoel, not knowing their true purpose.

After being saved from the mutating people, Pino was informed by the Grand Chase that the Creator's Morning was supposedly responsible for the incident. However, he didn't believe them and left to resolve any misunderstandings.

When the group found Pino, Tacoel confessed that the Order, in fact, turned the citizens into monsters. In the end, Pino would guide them to where the Creator's Morning is located after they handed over the real artifact to Flaune in exchange of saving the passengers from his plant magic. 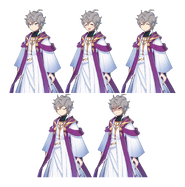 Expression system of Pino (Boss).
Add a photo to this gallery

Retrieved from "https://grandchase.fandom.com/wiki/Pino?oldid=74081"
Community content is available under CC-BY-SA unless otherwise noted.