from the Forest of Life (Kricktria)

Do you know of Black Wind? If you are someone who has tested the waters of the world of martial arts then you might have heard that name at least once. He is someone who appeared in the martial arts world without a teacher or faction and quickly defeated many masters. Suddenly a few years ago, he disappeared without a trace. Truthfully, I know why he disappeared. Aren't you curious?

At the time he had been taking down masters ones after another, but didn't really understand who he was. Why he was taking down masters? Why is he even fighting? Without understanding these things, he just went around seeking strong fighters just purely for the fun of it

At the time, it wasn't much different He had heard of an older martial artist master that had been living alone deep within the mountain and went to fight him, only to find that this so-called master's skill wasn't that great He was able to defeat him easily. However, in the decisive moment, he failed to control his power and the old man died.

In the world of martial arts, it is not common for people to lose their lives, but at the same time it doesn't mean that it never happens. Despite being a bit upset, he decided to bury the old man near his home. It was then that he suddenly heard the crying of a small child!

How could this be! The old man had not been living alone. He had been living with a child that was barely days old. The minute he saw the child, Black Wind's world came crashing down. How could he have used his half-baked skills to turn a child into a lifelong orphan? What in the world did this child and old man do to deserve this...? Instead of the usual pleasure he felt from winning, Black Wind could only feel guilt and embarrassment.

From that moment Black Wind retired from the world of martial arts. Apparently, he swore to never use martial arts again and moved deep within the forest with the child so that no one could ever find them. Why do I know so much?...That's... Hm...

Oh no! The child started crying again. I'm sure we'll have another chance to talk another time. 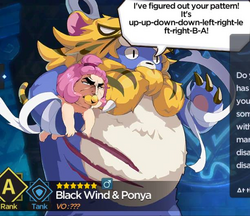 Retrieved from "https://grandchase.fandom.com/wiki/Ponya?oldid=79155"
Community content is available under CC-BY-SA unless otherwise noted.