The Prime Knight was chosen by the gods to establish balance in the world after it was thrown off by the forces of evil.

The powers of evil continued to grow and the gods soon realized that the mortal world was in peril. The gods summoned an elite group of Knights from which they selected the very best warriors to become Prime Knights. Sieghart the Highlander had been training with the other Highlander warriors when he caught the eyes of the gods and having passed all of the trials presented to him returned as the Prime Knight to save the world.

However, Prime Knight is not to use power recklessly. Thus Sieghart had been relying on his inherent talents, doing the best that he could up to this point. Yet with his natural powers alone, Sieghart is not strong enough to take on his new enemies. Now Sieghart has decided to finally take up the Soluna and display his full power as the Prime Knight.

With two swords in one, the Prime Knight has a long reach without being hindered by the weight of such a large weapon and as a result, can dominate his enemies with his quick moves and attacks. Prime Knight can grab and link combos by timing special commands and keys. The Prime Knight's Rage mode is more powerful than any of Sieghart's past jobs. Combining his attacks and skills with Rage will up the number of hits and change the motions on his grabs and taunts, maximizing their power.

When his rage is unleashed, the Prime Knight is a force to be reckoned with, able to charge through enemy lines and leave nothing but destruction in his wake.

"Sieghart, we can no longer fend off the forces of evil alone. It's time to meet your destiny!"

"We see you're mentally prepared to take on evil as the Prime Knight. But be warned, the Soluna has a soul of its own. The Moon must acknowledge you as her master."

"The Moon has accepted you as her master. Now you must earn acceptance from the Sun. Only then will the Soluna yield to your command."

As a Prime Knight, Sieghart's attacks have a variety of moves that can be easy to do or are both difficult and complex to pull off. If categorized, his attack modes can be summarized as the following:

On top of Sieghart's normal repertoire of attacks, he can add either an extra attack or change the animation of an attack through what is called a Just Frame or JF for short. It is an extension of Sieghart's current set of skills and combos. Certain attack combos and all of his MP skills are capable of using JF.

The JF move is both tricky to activate and difficult to time right. To perform a JF, the player must press the attack key

at the moment you see a blue light that appears as a blue halo over Sieghart. When you press

, Sieghart will add an extra attack at the end of the combo or MP skill or change the animation of the attack altogether. In a few of his moves, it is possible to perform a JF move at least once more as seen in all of his Dash Attacks.

Because JF always uses "hit" command to function, it is more heavily reliant on a working keyboard rather than lag or timing. When timed correctly and mastered, Sieghart's JF extends his current skillset increasing his overall damage. It also lengthens his sequence of basic skills and attacks making him a force to be reckoned with.

TIP: When using a JF command during a skill, the Rage meter will start draining again.

The Prime Knight's Rage mode is a bit different from Sieghart's other jobs. Upon activation, Sieghart unleashes a great amount of energy that results in an explosion throwing nearby enemies at a great distance. It lasts 10 seconds when fully charged whereas on his other jobs it lasts 5.6. This is an approximately 80% increase in duration. It gives a 10% bonus attack just like his other jobs but the base damage of his attacks notably his Grab is increased. The drawback is that unlike on his other jobs where it gives damage reduction, the Prime Knight's Rage Mode amplifies the damage Sieghart takes. This can be remedied by using Soul Break to finish Rage Mode immediately to prevent Sieghart from taking further enhanced damage.

Lastly, when adding a JF extension while in Rage mode, Sieghart's fury is unleashed in extra attack moves and damage. However, when JF is activated during a skill, the Rage gauge will resume draining. 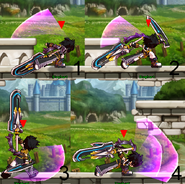 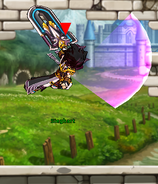 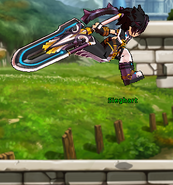 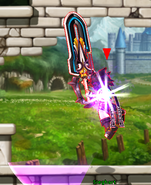 Raging Grab
Add a photo to this gallery

is the icon referring to when you press

the moment you see that JF halo appears. These key presses must be timed correctly or Sieghart will not perform the JF.

NOTE: (pause) refers to when to anticipate the JF "halo" to appear. 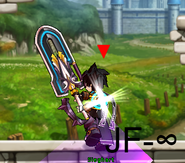 JF Hawk Attack
Add a photo to this gallery 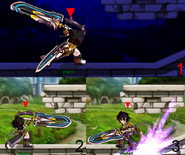 Birth of Blades
Add a photo to this gallery 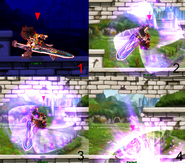 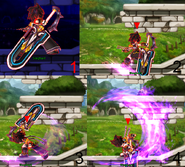 JF Raging Unlimited Blade
Add a photo to this gallery 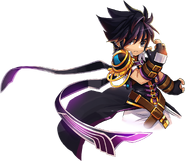 Retrieved from "https://grandchase.fandom.com/wiki/Prime_Knight?oldid=79036"
Community content is available under CC-BY-SA unless otherwise noted.