"The noble girl of dark Flame."

My name is Marjoram. I am an undead sorcerer, who at one time had a promising future. I had signed a contract because I was told that I would be managing elite soldiers, but I was tricked and left with a disorderly bunch.

Now, you must be wondering why I am appearing in Rasel's introduction. That is because I have something that must be said.

Honestly, this place is just bizarre... Just downright weird. You know, I was willing to look over the fact that I have idiot lifeforms as my equals or that the subordinates that they put under me are beasts like a snake or cat... However, the one thing I cannot comprehend is these bizarre siblings.

In the case of the older sister, when I first met her I thought she was a deity and not a demon. Not only is she kind, but she is also very well-mannered. She has this slow way of speaking that makes you think, this is what a daughter from a respectable family must be like.

But then when you listen to her speak with her little brother, it is like she turns into a different person. One time I saw her brother working hard to make an ice sculpture to give to her. Since the guy is pretty skillful, the sculpture had turned out decently. He had even asked if I thought his sister would like it and so I told him that she surely would. But then, when she saw the sculpture...

"This worthless microbe is doing something useless again..."

And then she burned the sculpture and just watched it melt. Of course, the brother is a given, even Fennel and I were shocked, but I even heard Belile tut-tutting to himself. After she left, I went to the stunned brother and told him she was being unreasonable. And then! He gets mad at me?!

Anyway, these siblings are weird. It looks like I must continue to research them.

Rasel can be fought as a boss in Act 7.6: Protector of the Door. She reappears with Hanout as mini-bosses in Act 7.9: The Final Battle and in the final wave of Epilogue 1.2: Trap.

Rasel utilizes the same attacks she has as a playable character. 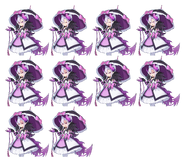 The expression system of Rasel. 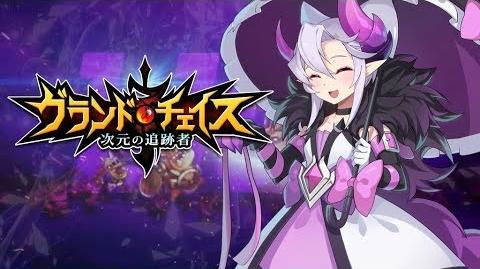 Retrieved from "https://grandchase.fandom.com/wiki/Rasel?oldid=81502"
Community content is available under CC-BY-SA unless otherwise noted.