The Red Gorgos is a large draconic creature that is found deep in the heart of Gorgos' Dungeon and fought as a boss. There is a variant of this monster known as the Dark Gorgos which appears as a miniboss in Kaze'aze's Castle.

There is nothing else known about the Red Gorgos other than being one of Kaze'aze's most feared subordinates.

Knight Master Isolet stated to the Grand Chase that the Red Gorgos withheld information of Kaze'aze's whereabouts. However, even after defeating him, the creature refused to give out what they needed to know and he warned Lire that her fellow elves were in danger.

The Dark Gorgos was among the army of monsters fought at the castle before the Grand Chase reached Kaze'aze herself.

The Dark Gorgos was once again encountered as the Grand Chase ascended the tower.

A pair of Dark Gorgos came in succession and began attacking the intruders of the tower. Noticing that the wounds from these monsters were oddly similar to each other, Io told them that the Tower of Disappearance they were in was merely a copy of the one previously created in Aernas years ago, albeit incomplete and so a failure, extending to some of the enemies they had defeated before.

Both the Red Gorgos and the Dark Gorgos attack with a small combo when players are close in front of them. Sometimes, they do a jump attack and home into a player, generating an earthquake that damages those that are still on the ground when they land. These creatures may also crouch down and then do a very fast horizontal charge, trapping any players in front of them on the edge of the room.

The Gorgos bosses have a DANGER attack where they breathe a large stream of fire in front of them horizontally but they do not have a great vertical range and can be avoided by being above, below, behind, or very close in front of these creatures. The Red Gorgos can also summon two Gorgons when he roars.

The Dark Gorgos reappears in the Tower of Disappearance wearing a more menacing form.

Concept art of the Red Gorgos. 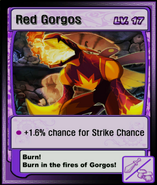 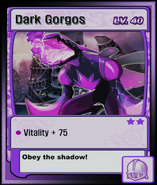 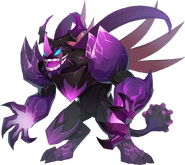 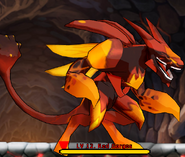 The Red Gorgos in Gorgos' Dungeon. 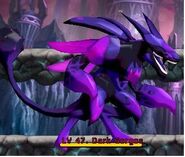 The Dark Gorgos in Kaze'aze's Castle.