"The reincarnation of Goddess Agnesia."

Darkness overwhelms the world during a total eclipse. Can you understand why? This is the story of a goddess who sacrificed herself to save the world. Pure evil has always been a fact of existence. Once the Malevolent Horde was awakened, its black flame began to consume everything.

The strength of the Malevolent Horde was so great even the gods were rendered helpless. With the destruction of existence at hand, only the sounds of suffering could be heard. Agnesia, the goddess of life and purity, was traveling eastward when she came to battle with the Malevolent Horde. Realizing that evil can never truly be expunged, she sacrificed herself by sealing the Malevolent Horde within her body.

Once the eclipse passes, another girl child will be born carrying within her an immense sadness. This time, the girl holding this darkness within her is Rin.

Rin grew up in the small village of Gaon, in an area distant and isolated from the rest of the world. The locals knew that the girl was the reincarnation of the goddess Agnesia so they treated her with love and always protected her from any danger. Under the tutelage of the last priests of Agnesia, she became a friendly and cheerful girl radiating purity despite being a little naive as she does not know the mysteries of the rest of the world. Trained to also become a priestess of Agnesia, her favorite pastime was playing with the gusts of wind that she was capable of commanding probably due to her divine inheritance.

Unfortunately, on her fifteenth birthday, Rin witnessed a tragedy. The date coincided with a solar eclipse that covered Aernas with darkness, thus increasing the power of evil and his followers. Out of nowhere, the village of Gaon was wiped out by a massive attack of demonic creatures. All the inhabitants fought bravely but in the end, Rin was the only one to escape with her life while the rest of her friends gave their lives to protect her. Behind that attack were the Evil Priests, servants of the ancient evil that sought to break free.

Alone and traumatized, Rin for the first time was taken by fury. It just made her feel the evil growing from inside her, trying to break free from the seal. Having come in contact with her dark side for the first time, the girl thought that she needed help to contain the evil that she carried within herself. Armed with her sacred fan, Rin decided that her only chance was to ask for help for the people of the great city whose stories she heard since she was a child. A distant city where magic was of utmost importance.

Since young, Rin grew up in a place where there was hardly any contact with the outside world and was treated with affection and protection thus acquiring a pure and bright personality. However, she is not very bright regarding worldly matters and often gets fooled by scheming people with bad intentions.

Rin is the first MP character to utilize the Action-Mana Point System. While similar to AP characters, Rin has an MP bar instead and can activate skills by charging. She can also bring up to 5 abilities including techniques and has job stacking.

Later on, the rest of the MP characters except Uno would receive the same hybrid system. Asin, Lime, and Edel use the Action-Mana Point System from the get-go.

Underneath her MP bar are 5 cards each of which resembles glyph charges. To obtain glyph charges, they recharge slowly or quickly if Rin is idle for a few seconds. A glyph charge is used whenever the

button is pressed when dashing, jumping, or performing a combo. This inflicts extra minor damage onto the opponent and leaves a temporary decrease in their defense. Although her skills use a glyph charge as well, no effects are placed onto the opponent.

When Rin takes the path of Twilight, she will not be able to utilize the Glyph System anymore. 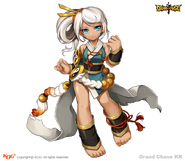 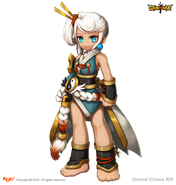 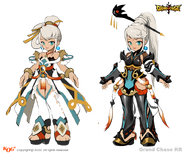 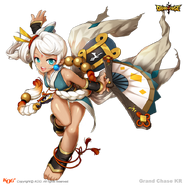 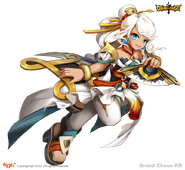 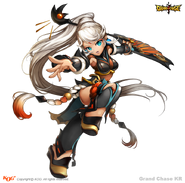 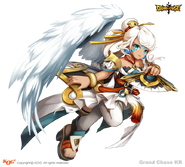 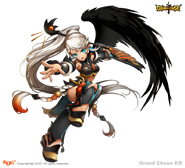 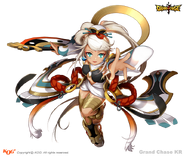 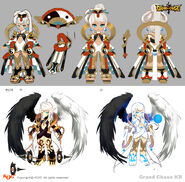 Promotional artwork of Phoenix in the Twelve Disciples update. 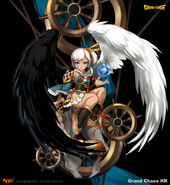