"Unstoppable Tyrant of the Forest."

As he covered the injured area, he looked up at his crying subordinates and could not help but get angry. Until recently, the Forest was a peaceful place under his control. However, Kyle, the invader appeared and destroyed that peace.

"Rocco, sir! You must make a decision. We can no longer sit and watch."

Just like there could not be two suns in the sky, a fight with Kyle could no longer be avoided. Rocco decided that it was time to prove who the true owner of the Forest was.

"I will personally challenge him to a fight between youths!"

And just like that, Rocco delivered a letter of challenge to Kyle. On the day of the fight, Rocco arrived early at the promised location and waited nervously for Kyle. However...

Despite many hours of passing, Kyle still had not appeared. Could it be that he ran away because he was scared? No. He was not that much of a coward. With those thoughts, Rocco continued to wait... And then, Kyle arrived... six hours after the promised time.

Kyle spoke as he lazily walked over yawning. Seeing this, Rocco became swept up in anger. However, after thinking for a moment, a thought struck him. Could this possibly be a trick? What a frightening man. Purposely coming later than the promised time to emotionally rattle his opponent...

"Do you think I will fall for such a cheap trick?"

With his emotions settled, Rocco ran in for an attack. And then...

That day the owner of the Forest changed.

Rocco can be fought as a mini-boss in Act 1.3: Where the Meteor Falls.

Rocco utilizes the same attacks he has as a playable character. 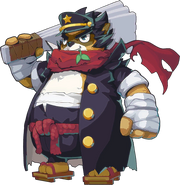 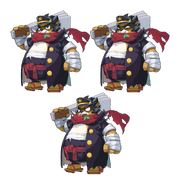 The expression system of Rocco.

Forest Tyrant icon.
Add a photo to this gallery

Retrieved from "https://grandchase.fandom.com/wiki/Rocco_(Kricktria)?oldid=82935"
Community content is available under CC-BY-SA unless otherwise noted.