The captain of the Royal Guard of the Kanavan kingdom, Ronan is the firstborn of the noble and prestigious Erudon family, the legendary family of Spell Knights in Kanavan, and has shown amazing talent with both sword and magic since his childhood.

He is the youngest of the Royal Guard to be appointed the mission to guard Anyu, princess and heir to the throne of Kanavan, and the Queen. An excellent swordsman with amazing magical potential as a child, Ronan was praised as the most powerful Spell Knight and celebrated as the next captain of the Royal Guard. With his name on the lips of all the people of Kanavan, the atmosphere of expectation only served to make him confused.

During Ronan's childhood, the Royal Guard Karina Erudon was accused of being the mastermind behind the incident of the massacre of royalty and was exiled, causing a great crisis in the house of Erudon. Although young, his every move was directly connected with the honor of his family, from his study of martial arts to his education and conduct, a torturous experience during his childhood.

Ronan was with the Sentinels pushing back the legion of monsters when he met with Grand Chase during the battle against Gaikoz and joined them after the battle.

Ronan grew up along with his friend Harpe Noir, a member of an organization of the Erudon family called Existor and someone he considered with feelings surpassing that of a blood brother. However, Harpe lost his life whilst saving Ronan from Ashtaroth.

Ronan is a Libra, gentle and distasteful of conflict, naturally choosing to pursue harmony. As a human warrior who pursues absolute good, Ronan hates Kaze'aze intensely. He is unable to forgive the atrocities he committed whilst under Kaze'aze's mental control and blames himself for failing to protect the Queen.

Ronan's unique feature, Erudon Weapons, enhances his move set and/or fighting abilities. For him to awaken those weapons, he needs to fill up a gauge under his MP bars. The gauge fills up slowly by itself, and when it's full, pressing

will summon the respective Erudon Weapon for the respective job. The sole exception to the rule is the Spell Knight, who has to fill the bar by attacking his enemies. Note that

attacks will fill the gauge faster than the ordinary ones. Once the weapon is summoned, the gauge will start to empty itself. While the Spell Knight can increase the duration of Erudon's Sword by hitting opponents, Ronan's other jobs do not have such features and thus have to maximize their performance with Erudon Weapons to not waste precious time.

while possessing an Erudon Weapon will immediately remove it, but take note that there is no compensation for the remaining duration of the weapon in the rune gauge.

Each of Ronan's classes has its weapons, all with varying effects:

Ronan can be unlocked by purchasing a Mission scroll from the shop and completing its objectives.

"A new warrior is thinking about joining the Grand Chase. If you prove yourself to the new warrior, he'll join the Chase with you." 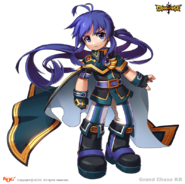 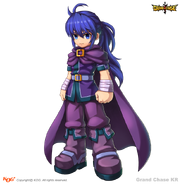 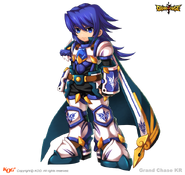 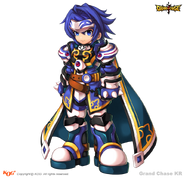 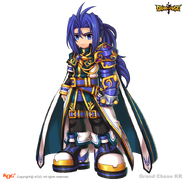 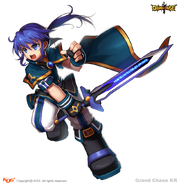 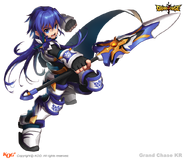 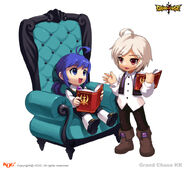 Ronan during the Serdin-Kanavan war.

Promotional artwork of Judgment Day in the Twelve Disciples update.

Promotional artwork of Judgment Day in the Character Rebalance update.