Alive
Russell is a Bounty Hunter from the Wilderness and the acting General of the Haros Justice Army.

There is nothing else known about Russell other than being a loyal friend to Legis Wilde.

After they witnessed them put a stop to Changhae and his Underworld soldiers, Russell was certain that the Grand Chase were not their enemies. Marcus reasoned that it was not bad to be careful nevertheless the General felt sorry for making Her Highness wait because of their prudence.

Russell introduced himself and expressed his gratitude towards the Queen for coming in their village as the Grand Chase got to know that they were the Haros Justice Army. When Marcus kept doubting Rufus, the General defended the Bounty Hunter from his allegations saying that there was no way he would be a traitor since he was the son of Legis.

Utterly confused about what had just happened, the Grand Chase realized they were tricked therefore Russell led them to the cave that he told the Haros Justice Army to go through where they faced enemies.

General Russell received a message from Marcus saying that they would attack the empty base while the enemies were gone, claiming that it should affect in blocking their retreat. Although Russell was dubious of Marcus' decision, they proceeded in finding Her Highness.

When asked about Elscud, Russell described the Gate Knight as a soul soldier protecting the Gateway Base for over a thousand years and heard the gate was hard to pass because of him. The Grand Chase also learned that because the Gate Knight was a criminal who twisted the fate of a world, he was given a total of ten thousand years as his sentence.

The General had no comments when Marcus tried to justify using the Queen as bait for his strategy.

As the revolution started forming to endanger Her Highness, the Grand Chase sought help from Russell who was missing in action.

The group confronted General Russell who did not stop Marcus prior as they believed that it was not the will of the commander to cause chaos in the Underworld and Tristan brainwashed him. He remarked that it was a sad story in itself, adding that Tristan was a starting member of the Haros Justice Army. Saddened that Rufus could not trust his old friend anymore, Russell mentioned missing Legis and felt that he was not fit to be their General. He sent the Grand Chase away, hoping they could turn Marcus' heart around.

While Marcus led the Justice Army alongside the Queen, Russell instructed them that the royals were on Heitaros' side, emphasizing that the ones they should hate were the demons destroying the Underworld. Ronan advised the Justice Army to last long because the enemies did not have enough resources and would want to defeat them in a short period. Although not confident about the odds, the General was thankful to Ronan and swore to tie up Heitaros then and there.

Russell cheered for Legis Wilde as the Queen called for everyone to honor the name of the general who made the first resistance. 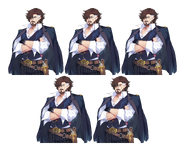 The expression system of Russell.