After being rescued from the desert by the members of the Grand Chase, Lime learns that the demon invasions are connected with Ashtaroth and joins the Chase to defeat the evil entity.

As Lime travels with the Grand Chase and deals with the increasingly powerful forces of evil, she realizes her current powers are not enough to impose justice upon her enemies. To deal with the problem, she turns to her senior Grand Chase members whom she respects a great deal and asks, nags and begs them to train her. As a result, she learns to use different new auras and battling techniques, becoming a Saint. 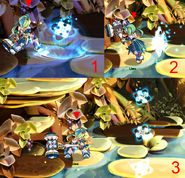 Liberation
Add a photo to this gallery

Retrieved from "https://grandchase.fandom.com/wiki/Saint?oldid=76038"
Community content is available under CC-BY-SA unless otherwise noted.