Lord Samsara is the God of Circulation from Xenia that is fought as a boss in the Temple of Cuatal and held the Orb of Cycles. His attributes also include Light and Origins.

There is nothing else known about Samsara other than being one of the native guardians that had existed in Xenia who took a fragment of the shattered Soul Stone and became a god.

Samsara's voice called to the Grand Chase in Kastulle Ruins, requesting their help.

Lenasien and Octus mentioned Samsara as a "Virtuous Man" who instructed the gatekeepers to greet the Grand Chase as they entered the Xenia Border.

When the Grand Chase arrived at the temple, Samsara's "voice" started requesting their aid once again, claiming that his corrupted followers were attacking him. Before reaching him, his guardian Vanessa blocked the way, saying that Samsara was preparing a ceremony, and should not be disturbed. After getting her senses back, she then requested that they help him immediately.

Upon reaching the temple's summit, Samsara was encountered, half-possessed, and confronted by a Fanatic Bomb Soldier and a Fanatic Shield Soldier. He unleashed a powerful kick, killing them both. The God of Cycles then turned his attention to the Grand Chase, threatening to destroy them, showing that he was fully possessed.

After being freed from the shackles of darkness, Samsara thanked the group and taught them about the gods of Xenia and how Thanatos destroyed the balance with corruption, causing all the other deities to fall beneath his might. He stated that using the other Deity Orbs was the only way to defeat the Ascendant God. Samsara offered them the Orb of Cycles, asking the Grand Chase to free Starkiln from evil and collect the Orb of Hell Fire.

Vanessa mentioned that Lord Samsara sensed danger ahead of the Grand Chase and had sent her for support.

Samsara's basic attacks consist of punching or kicking the player near his upper and lower body respectively, sending the player to the other side of the room. He can also do a jump attack, in which he targets a player, and if hit, the player can take a large amount of damage. It can be avoided by moving out of the location of his descent. Another attack Samsara has is a series of blue projectiles that shoot out in numerous directions but requires a couple of seconds of charging. He can also cast a fireball that will cause a giant pillar of fire at the designated area.

Samsara is unaffected by any status changes, like freezing and petrify, and cannot be knocked back or knocked down. Also, he has already in himself the Arrow Defense property, greatly decreasing the arrow damage done by Lire. However, Samsara will start receiving normal damage while performing his attacks. 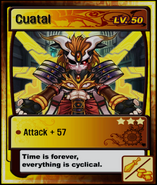 Samsara with the mask on. 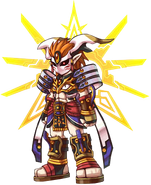 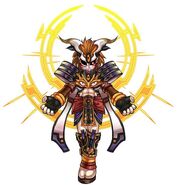