The Silver Knights were a group of warriors similar to Grand Chase that united to protect Xenia and Silver Land from the Ascendant God, Thanatos.

After an attack led by Victor, the group has fallen with only Jin, Amy, and Pan as known survivors.

Victor was the leader of the Silver Knights. He betrayed his organization and started a new one called the Black Knights. Eventually, he slaughtered every single Silver Knight as he deemed them weak, joining forces with Thanatos so he could "protect" Silver Land.

In his own fortress, Victor was killed by Jin who vowed to avenge his lost brothers. He then asked for more strength from Thanatos but told Victor that he outlived his usefulness and did not need him anymore.

Asin Tairin was the second-in-command of the Silver Knights and Jin's mentor. Sometime after Victor's betrayal, hordes of monsters begun to approach what was left of the Silver Knights. Under his command, Asin ordered Jin to flee but later thought that his student did not survive the onslaught.

Asin was badly wounded when a young boy found him in the forest and healed his wounds. He decided to repay the kindness by teaching the young boy the ways of the Silver Knights. He eventually died saving his new student from another horde of monsters.

Jin Kaien is the only living member of the Silver Knights. In his childhood, Jin gained skills in martial arts that surpassed other children of his age. As a result, he caught the eye of Victor and was admitted as a trainee.

The second disciple of Asin Tairin was a nameless boy from Kanavan who was bullied and had no friends. When the boy saved the badly wounded Asin, he returned the favor by training him with Silver Land's martial arts and left him the status of Silver Knight.

After Asin's death, the young boy swore to become stronger than anyone else including his master's prodigious pupil, Jin.

It was strongly hinted that King Guang and King Fang were allied to the Silver Knights as they befriended Jin in the past and he went to assist them during Silver Land's corruption.

King Guang was a giant sea serpent that was originally known to guard over the waters of Silver Land. When seen in his fen, Guang was already possessed. Ultimately, he gave in and attacked the Chase against his will. When defeated, he requested to let him die so that the water he stole will go back to wherever he took it from.

King Fang is a giant worm that was a beloved friend of King Guang. He was brought false information by a messenger and became outraged. When defeated, Fang apologized to Guang as he failed to avenge him.

Realizing the truth, Fang apologized to the Chase as he acted so rashly. They promised to avenge the guardians by hunting the source of corruption. Before they set off, King Fang revealed that Victor was responsible for the chaos.

Amy Plie is an Oracle of the Silver Land. She left the deities she once served after the great war erupted between the gods and joined forces with the Silver Knights. One day, the headquarters were attacked and as a result, Amy decided to head north.

Along the way she met the Grand Chase and joined them to help fight off Thanatos.

Pan was a recent trainee for the Silver Knights until the attack happened in the headquarters which left him confused and devastated. 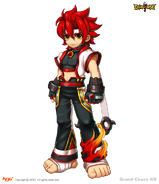 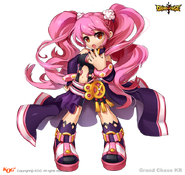 Emblem of the Silver Knights.
Add a photo to this gallery

Retrieved from "https://grandchase.fandom.com/wiki/Silver_Knights?oldid=81821"
Community content is available under CC-BY-SA unless otherwise noted.