The most trusted Oracle of the Xenia continent has four classes: Dancer, Muse, Siren, and the highest of Oracles, Starlet. During the war of the gods, the Starlet of the time, Lilith, was kidnapped by the Ascendant God, and the position has been vacant ever since. Sister Maggie, who in her youth has filled the position of the Starlet herself, began training and encouraging young sisters in the order to fill the position until she met Amy, who was currently on her great journey. Sister Maggie recognized her potential as soon as she laid eyes on Amy, and proposed to install her as the next Starlet, but Amy agreed only if Maggie would promise to turn her into a "superstar." Handing Amy a Chu-Chu Bag, a weapon containing many different things with the power to destroy evil and rescue the gods, she entreated Amy to become a righteous Starlet.

Now a Starlet, a true superstar, Amy embarks on a new journey through Xenia, doling out hope and encouragement from her Chu-Chu Bag, brightening the continent and making the gods smile again.

Starlet possesses Amy's speed and freedom of movement, allowing for Starlet's attacks to climax both on the ground and in the air. Though shooting a machine gun from the air or firing a cannon from the ground are not acts becoming of an Oracle, they're still effective in battle. Since there are no jobs that allow a restrained mid-range attack quickly chained with a spin combo attack, in a 1:1 situation or a battle with many foes, regardless of the battle, a double jump with a quick dash will be effective in confusing the enemy, definitively marking Starlet's fighting style. Because Starlet is Amy's top job, it is also infused with Amy's special brand of performances. Her combos, range attacks, healing skills, specials, and more can all be enjoyed from afar because of the exciting action and drama she brings!

"Amy I recognized your talent at once. You are more than talented enough to become a Starlet. However, as with all things, there are procedures and rules. Wh...What? You want to be a super idol?"

"Just as I thought my eyes hadn't failed me! Becoming a goddess is not easy. Okay! If you pass this next test then I will consider your desire to become a superstar."

"Amy, this is the final test. Become a Starlet and I will bestow upon you this Chu-Chu Bag. Ah... And, you can be a superstar or whatever it is, too!" 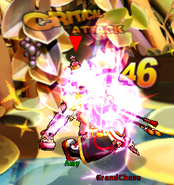 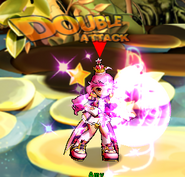 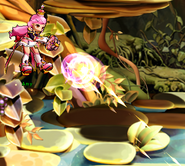 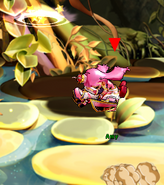 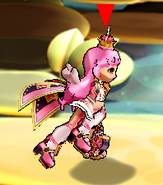 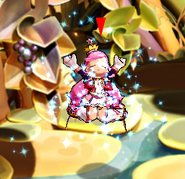 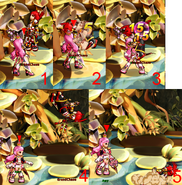 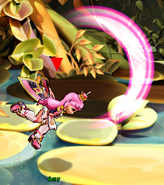 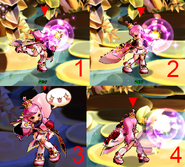 Tears of the Goddess

Elegant Flow
Add a photo to this gallery 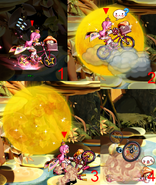 Elegant Flow
Add a photo to this gallery

Retrieved from "https://grandchase.fandom.com/wiki/Starlet?oldid=80801"
Community content is available under CC-BY-SA unless otherwise noted.