Alive
Stellar is a member of the Violet Mage Guild. She was revealed to be a henchman of Kaze'aze and had hidden the Knights of Serdin that were affected by the "erosion of souls" in attempts of controlling them and reigniting the civil war between the Serdin Kingdom and the Kanavan Kingdom.

There is nothing else known about Stellar other than being a Violet Mage teacher and once a student of Serre.

Before she appeared in the main storyline of the game, Stellar made her debut as an NPC simply known as 'Violet Mage Teacher' in EP 2: Genius Magician? of Arme's Likability.

After Jason was defeated, the self-proclaimed genius Stellar introduced herself to Rin, Asin, and Edel. She claimed that the security team asked her to investigate and drove the trio away as they might get infected as well.

Stellar was seen leading the security guards to take the fallen soldiers into a secret facility in the kingdom. The trio overheard the Violet Mage and found out that she was the person behind the soul erosion infecting the people of Serdin.

Jason revealed that Stellar was planning to make all knights infected by the erosion of souls, starting with the security guards, and use them as her puppets to reenact the Kingdom War.

Stellar was alarmed when Edel had already learned about her connection with the demons and threatened to silence the witness. They traded blows, ultimately ending the magician's defeat.

Much to her surprise, the Grand Mage came and told Stellar to stop all the madness, blaming himself for letting his shining child fade to the dark. She refused to accept the old man's words and swore to return as a greater magician.

Epilogue 7.2: To the Shadow of Corruption

While grumbling about Vice also trapping her in the magic seal, Io and her acquaintances caught up with Stellar and it startled her.

Stellar thought the intruders followed her into the Tower of Disappearance but Asin asserted that it was just a coincidence, asking why they would follow her who was just a puppet of the Kanavan court magician. Greatly offended, she went on how she was supposed to be the superior magician among the two which pointed to Stellar being the main culprit of all the cases. As they decided to capture the Violet Mage, she called for the tower gatekeeper Gaikoz and fled the scene.

Stellar complained that Vice should have discussed the change in plans but the court magician blamed her for messing up everything. Feeling that they could never get along after Vice told her there would not be any more chances, she went off to talk to Kaze'aze herself.

While the mages were panicked over her making an enemy of Kaze'aze's closest person, Stellar was still infuriated at how she was treated by Vice and was scheming on how to take her down when pursuers succeeded in catching up. Once again, the magician brought out her grunts and went to the Dimensional Chasm.

Subjected to pressure, Stellar was forced using a method where she made contact with the Spirit World across the Chasm. As she was cornered by her pursuers, she declared that her magical power became comparable to that of a Spirit Lord. However, she was still conquered by them. Furthermore, Stellar caused the Dimensional Chasm to rage by trying to control a dimension, inadvertently letting out the invasive Void species.

Stellar told the group that stopping the invasion was pointless due to that the Dimensional Chasm was raging and the Void could appear any time again. Asin then pressed the magician to fix the mess she created.

Rin realized that the dimension research material from the Violet Mage guild was written by Stellar which Asin made fun of for rather lacking content while Edel thought she chose to get power from the demons, much to her displeasure. When Io asked the reason for interweaving material worlds into one, the magician said that Kaze'aze wanted to combine them to create a second Underworld which would give existence to an eternal world without death.

As Stellar presided over the Dimensional Chasm, Asin noticed something coming out again and told her to get out of his way only to find out they were his lost comrades. Shortly after, Arme saw her teacher among the group and asked her what she was doing with them.

Stellar can be fought as a boss in Act 23.9: Speechless Witness and Epilogue 7.5: Power Beyond Dimension. 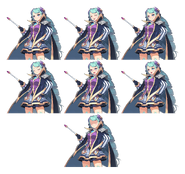 The expression system of Stellar.