"Guardian of God by day, guardian of Metal by night."

Q. Please first say hello to your fans.
A. What's good, foolish beasts! My name is Tacoel, and I am here to rock your minds.

Q. What are your likes and dislikes?
A. My likes? Money, of course! The reason I do music is for money. What I hate are people who talk trash and don't spend a dime. Put your money where your mouth is, then say something!

Q. Though it's probably not true, there's a rumor that you are actually a Sister for some religious organization...
A. Next question... Ah, please edit this out.

Q. Could you tell us something about the newly released single?
A. I fell on hard times, bad luck... I wrote it because I ran out of money. It's trash music. It's over. Enough of that though, make sure you buy my t-shirts and swag on your way out!

Q. Lastly, please say something to the fans!
A. To all of you, be healthy, wealthy and show me the money!

Tacoel can be fought as a boss in Act 9.9: Rescue the Citizens!.

Tacoel utilizes the same attacks she has as a playable character. 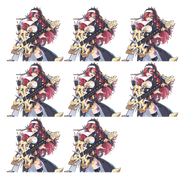 The expression system of Tacoel.

Retrieved from "https://grandchase.fandom.com/wiki/Tacoel?oldid=81493"
Community content is available under CC-BY-SA unless otherwise noted.