Talin's Revenge, also known as Talin Strikes Back, is a special event dungeon. Unlike typical dungeons, it is based on the Shoot 'Em Up style. It can be played alone or with a partner.

Like all event dungeons, this dungeon requires a Smartkey to enter. If a player does not have any keys upon completion of the dungeon, they will automatically be kicked out of the room. 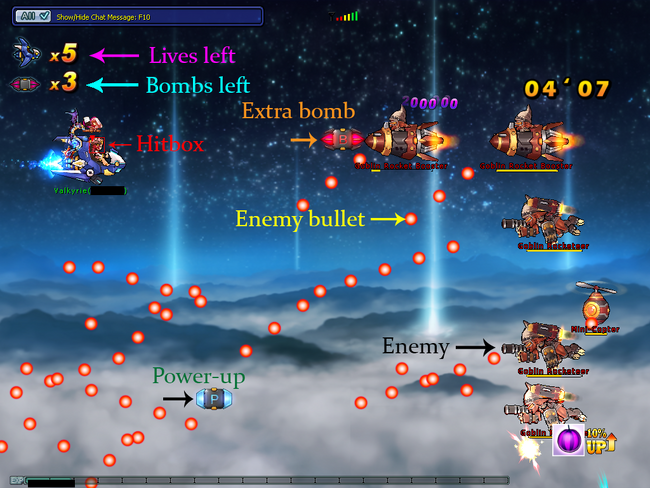 Red: The character's hitbox, the only part that can be hit by enemy projectiles.
Yellow: An enemy projectile.
Black: An enemy. Some must be defeated in order to proceed to the next wave of enemies, others will just go forward and then out from the screen, if they are not defeated.
Green: Power-up item pack.
Orange: Extra bomb item pack.
Magenta: Lives left. If the player has 0 lives left and dies, the game will be over, and he/she will fail the dungeon.
Skyblue: Bombs left. The player cannot hold more than 3 bombs.

Stats and armor do not have an affect on the dungeon as all damage dealt is set and being hit will result instant death. However, shield effects from equipped earrings do block several hits from enemy monsters.

Projectiles such as lasers or Talinroid's Flame orbs have a smaller hit box than what the pictures show. The blue lines, circles, and the space inside them, are the only places where the projectiles can hit the player.

Players are set in aircrafts called Valkyries which can fire multiple projectiles with three lives, each coming with three bombs. The player must dodge and return fire to enemy monsters as they proceed to the boss. The player will die instantly if their character is hit by any projectile or touched by a monster. 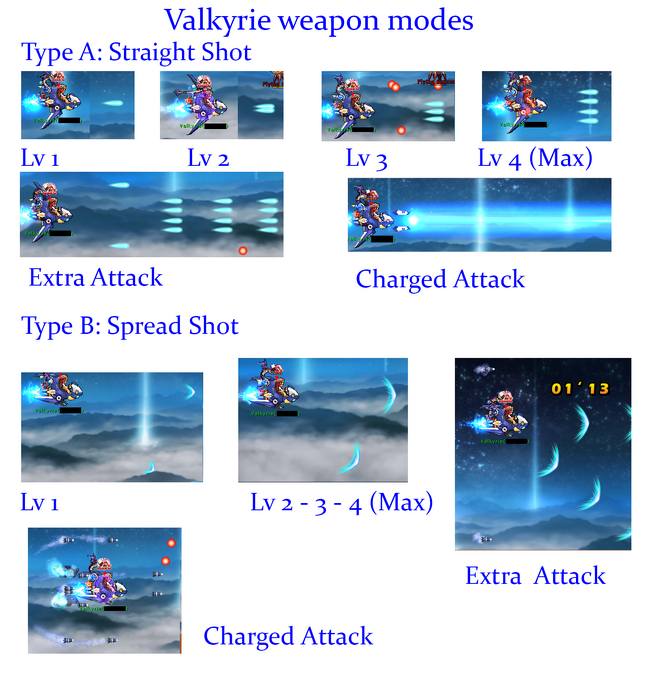 The Valkyrie has 2 modes that can be switched between with the space bar, Mode A and B. Basic attacks can be fired by pressing the Z button. After repeated basic attacks an extra attack will be shot from the Valkyrie. A charged attack can be used by holding the Z button. After a visual and audio cue, the button can be released to fire one of the two special attacks. The aircraft cannot charge another special attack while the their attack is still active.

Mode A fires bullets in a straight line along with its charged laser. The bullets are extremely close together and deal great damage to single enemies. The laser stays at the position it was released for around 5 seconds, dealing high damage to the area. However, monsters can move out of the area to avoid the attack.

Mode B fires waves diagonally and horizontally. These waves are great for hitting multiple targets at different locations while the homing missiles can hit enemies without the need to move into a line of fire.

Monsters also occasionally drop item packs when defeated which provide power-ups to defeat the later bosses. Items will bounce across the map slowly, drifting across dangerous spots and empty areas.

Basic and extra attacks can be upgraded from a P item pack which will either increase the amount of bullets fired or increase the size of the attack. Each Valkyrie can only have 3 P item packs and obtaining anymore will not upgrade the Valkyrie further. These item packs will be ejected from the Valkyrie of a killed player and can be picked up again. 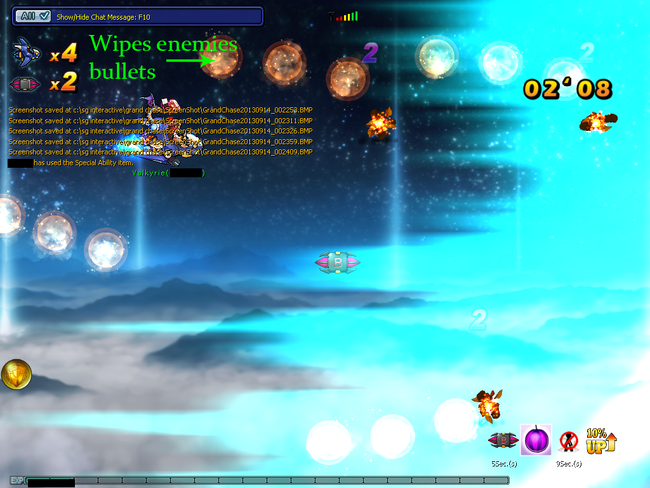 Bombs attack with an energy wave that deals massive damage to all monsters onscreen, in addition to destroying all enemy projectiles and granting the user invincibility for 5 seconds. This can be extremely useful when there is no way to dodge an enemy's attacks or when there are simply to many monsters on screen to fight normally.

After the battle with Ashtaroth, the Grand Chase receives an urgent news from the Queen of Serdin to return immediately. The Chase decide to use the Kounat aircrafts, the Valkyries, for a faster transport. However, along the way, they run into Talin Elfbane who wishes to destroy them out of revenge.

Elesis: Stop, Arme! This is not a toy, It is an important artifact from Kounat!

Ronan: I can't believe my eyes. An ancient artifact that surpasses the current generation's technology... If it wasn't for Queen Serdin's order to return immediately we wouldn't have been able to lay a finger on it. Only an expert Archaeologist would normally be allowed.

Arme: Pewpewpewpew! Taste my bullet of justice! Wahahaha! This is more fun than magic. Now that Ashtaroth is slain, maybe I should get a new job... Legendary Pilot, Arme Glenstid! PEW!

Lass: It has been a while since they were this lively. You look pretty happy too, Lire.

Lire: Yes... Hehe, it has been far too long since I was able to enjoy tranquility like this.

Asin: ...But you don't look so peaceful Sieghart.

Lire: Hmm? Oh no, Sieghart! You are sweating. Is it the wound from the fight with Ashtaroth?! You need first aid...!

Mari: ...Step aside for a moment. Medical System Activated. Checking for heart rate and pupils. Irrational and excessive mental reaction is detected. Excessive activity in the Amygdala area results to Acrophobia...Fear of heights.

Lime: Eh, Oh, here it is on Hero Index page 126 in the Sieghart Chapter! Don't worry, Sieghart! I, Lime will make sure the Goddess watches over you during the flight!

Sieghart: W-What's with that sigh? You want to fight?

Dio: A proud demon does not fight idiots who can't even open their eyes.

Sieghart: Y-You, I will get you for this!
???: BoomBoomBoom

Lass: What are those? Machines?

Lire: One thing's for sure, they aren't friendly! Everyone, Prepare for battle!

Talin Elfbane: Hahahahahah! Vengeance will be mine! You have made it this far, weaklings! But your luck just ran out! You won't go any further than this!

Amy: Oh, it's just the stalker... You have a terrible speech! Hey! The war's over!
Talin Elfbane: Hahahahaha! I am a man of passion, and a man of passion never forgets his personal revenge! With all my pride, I am going to pay you back for all the humiliation you have caused me! Come, let's finish this once and for all!

Ronan: Why can't we ever go a day without getting into a fight.

Lire: Please everyone, focus on the attack that is heading our way!

Talin Elfbane: I will have my revenge next time, Grand Chase! Next time!

Elesis: You have to give him credit for his determination.

Ronan: Even so, We have been delayed by this event. Now, let us hurry. The Queen is waiting for us. Let's all head for Serdin!